The subversion of signs from Marcel Duchamp to Prada Meinhof. A thematic exhibition with works by over 50 international artists and group, on the disturbing reinterpretation of powerfully effective images in art, popular culture, political agitation and advertising. 'Culture Jamming' is an aesthetic strategy of civil disobedience which has been used increasingly frequently not only in Pop and Art, but also in political activism over the last two decades. 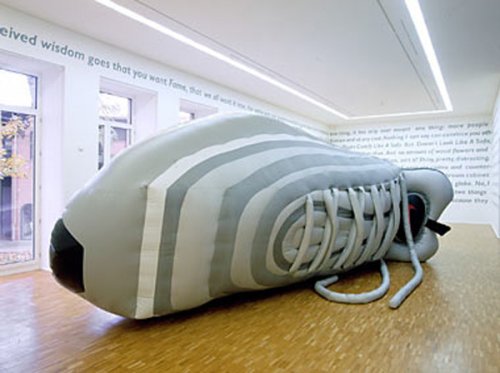 The subversion of signs from Marcel Duchamp to Prada Meinhof

Statement:
A thematic exhibition on the disturbing reinterpretation of powerfully effective images in art, popular culture, political agitation and advertising. "Culture Jamming" is an aesthetic strategy of civil disobedience which has been used increasingly frequently not only in Pop and Art, but also in political activism over the last two decades. However the history of cultural "disruptive sounds" goes back a long way, for instance to Marcel Duchamps Ready-made of the Mona Lisa with a painted moustache from the year 1919. It includes Kurt Schwitters use of the series of letters MERZ, which the Dadaist took from the name "Commerzbank", and culminates in Andy Warhols hyper-affirmation of consumption. It branches out from the comics of the "Situationist International" which were politicized with radical slogans, to the Punk Fanzines of the 1970's, and leads to the present with Media Activism forms like Hoaxing, Sniping or Viral Marketing. Just do it! endeavors to portray the area of conflict between new emancipatory codification of signs and the appropriation of "Culture-jamming" technologies in consumer-oriented deviation marketing, taking into consideration the art-historical references.

Concept/Structure:
From Marcel Duchamp's readymade of Mona Lisa with a mustache painted on, through the comics politicized with radical slogans and other detournements of the Situationists, all the way to current forms of media activism like hoaxing, sniping or viral marketing: the arsenal of techniques for subverting meaning in (mass) media cycles has been definitively expanded, not least of all due to the possibilities provided by the Internet. If producing one's own signs appears to be the only possibility for generating autonomous and communicatively relevant meaning within the social machinery of the production of signs, then "Culture Jamming" operates as a placeholder for all the forms of the appropriation, plagiarizing, parody, over-affirmation and distortion of media events and advertising campaigns.

Culture Jamming derives from the term "jamming", meaning the interference noises of CB radio operators who disrupt radio broadcasts with obscenities. Culture Jamming can thus be regarded as the wily response to semiotic coercion by the hegemonial circulation of signs as civil disobedience, which is frequently electronically mediated today. Here the twisting of the (advertising) message does not refer primarily to the product. Cognitive dissonance emerges at a more general level, where the communicated values of the original are called into question. An advantage of this technique is that Culture Jammers frequently allow the image of the adversary, which may be worth millions, to work for them. The insurrection is not based on actual power relations, but rather on difference.

The production of the interplay of difference and repetition can be recognized in numerous art-historical examples as an applied strategy; from Kurt Schwitter's use of the letter sequence MERZ, which the Dadaist lifted from the name "Commerzbank", through the transformation of the brand Ricard into the Pop Art artist Richard Hamilton's Richard, to the use of Culture Jamming by the US American artists General Idea in their agitation on the theme of AIDS. Culture Jamming thus proves to be an aesthetic technique used continuously by the (neo-) avant-garde of the 20th century. Today this flows into a controversial, mass cultural practice of sign production, which is constantly newly coopted on the one hand by activism striving for criticism and subversion, and on the other by entrepreneurial and political advertising in their battle for a "cool" deviation from the norm.

In multiple, thematically structured stations, the exhibition seeks to sketch out current areas of application - such as the image and logo value of Nike, for instance - as well as to illustrate the historical relationships of affinity and the charged fields of Culture Jamming in and between art, pop culture and activism. In addition, a separate information and working space will be set up for visitors, in which supplementary and accompanying material (documents, magazines, audiovisual media, copy machines, readers, Internet access with links to net activism addresses, a music station with relevant record covers, etc.) will be made available.