For every minute you are angry you lose sixty seconds of happiness. In an exhibition of photographs taken over a period of eight years, the artist documents his unique friendship with an elderly gentleman, Charles Albert Lucien Snelling. A series of poignant images capture the quiet and contemplative existence of an old man living in a small house on the south coast of England. 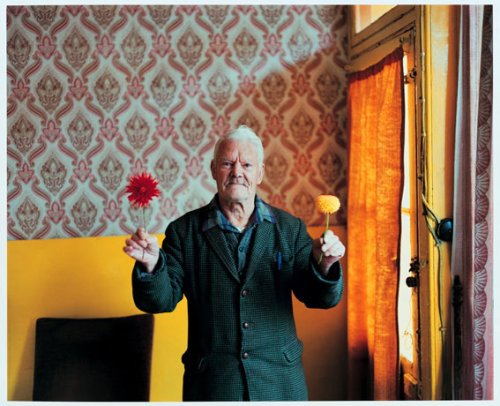 In an exhibition of photographs taken over a period of eight years, Julian Germain documents his unique friendship with an elderly gentleman, Charles Albert Lucien Snelling. A series of poignant images, shown alongside Charlieâ€™s own photo albums, capture the quiet and contemplative existence of an old man living in a small house on the south coast of England. Charlie spent the last years of his life absorbed in memories of his wife and children, his love for flowers, music and the quotidian pleasures of the crossword, and collections of his own photographs.

In April 1992 Julian Germain was on his way to photograph a football match in Portsmouth when he noticed a brightly painted yellow and orange terraced house. As there were a few plants displayed for sale in the bay window, he went inside and met Charlie for the first time.

â€˜Charlie was a simple, gentle man. He loved flowers and the names of flowers. He loved colour and surrounded himself with colour. He loved his wife.â€¦.â€™ â€˜Without ever trying or intending to, he showed me that the most important things in life cost nothing at all. He was my antidote to modern living.â€™

Memory, history and childhood have been recurring themes in Julian Germainâ€™s work, which in a broader sense might be seen as a route to seeking out meaning in human life. Germain (1962) is one of the younger generation of British documentary photographers to emerge in the late 1980â€™s. His work has often been associated with the â€˜new colourâ€™ movement of that time, led in the UK by Paul Graham and Martin Parr, but his practise sits more readily within a longer established humanistic tradition of photography as social observation, raising questions and occasionally hoping (in a small way) to affect change.

Other work has included the documentation of generations of footballers in the city of Vigo in northern Spain (2000) and a variety of collaborative projects with young people in Brazil and Europe. He made his name with an influential book (Steel Works, 1990) about the closure of Consett steelworks near Newcastle upon Tyne which combines his own photographs with historical images and pictures from family albums. His continued belief in the value of every day images is reflected in this exhibition by the presentation of Charlieâ€™s photographs alongside his own. For every minute you are angry you lose sixty seconds of happiness is presented at BALTIC from 5 March â€“ 5 June 2005.

Julian Germain is an internationally renowned artist and has had solo exhibitions around the world in London, Tokyo, Sao Paolo, Buenos Aires, Rome and Naples. He is currently Fellow in Photography at the National Museum of Photography, Film and Television, England. He is an Editor of Useful Photography magazine and his previous publications include In Soccer Wonderland, Steel Works and The Face of the Century. Julian Germain was born in London in 1962. He now lives and works in Northumberland.

For every minute you are angry you lose sixty seconds of happiness, has previously been shown at the Netherlands Photo Museum, Rotterdam (from 22 January 2005), and will subsequently be shown at Aspex, Portsmouth in Summer 2005. A major exhibition of Germain's work will be held at the National Museum of Photography, Film and Television in Bradford in Autumn 2005.

This exhibition is accompanied by a book published by Steidl MACK, supported and developed by photoNORTH, in partnership with the Van Zoetendaal Gallery, Amsterdam. 80 pages with 41 colour plates, printed clothbound hardcover. ISBN 3-86521-077-5. Copies of the book are available from the BALTIC Shop priced Â£19.99. (Special exhibition price Â£17.99)

Image: From the series For Every Minute You are Angry, You Lose Sixty Seconds of Happiness.