13 works that use architectural models, renderings, drawings, videos, and photographs to articulate the failed outcome of social and architectural programs in Cuba. Adopting the city of Havana as his laboratory, Garaicoa has been working since the early 1990s using a multidisciplinary approach, in his work explores the sociological and psychological impact of utopian spaces. 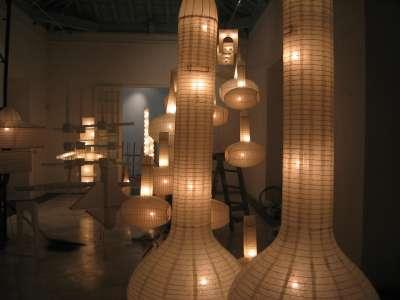 The Museum of Contemporary Art (MOCA) organizes the first U.S. museum survey of recent work by Cuban artist Carlos Garaicoa, who addresses Cuba's politics and ideologies through the examination of modern architecture. Presenting a selection of new works created specially for the exhibition, Carlos Garaicoa opens at MOCA Pacific Design Center (8687 Melrose Avenue in West Hollywood) on March 6, 2005, and remains on view through June 12, 2005.

Organized by MOCA Associate Curator Alma Ruiz, Carlos Garaicoa features 13 works that use architectural models, renderings, drawings, videos, and photographs to articulate the failed outcome of social and architectural programs in Cuba. Adopting the city of Havana as his laboratory, Garaicoa has been working since the early 1990s using a multidisciplinary approach that includes architecture and urbanism, narrative, history, and politics. His works are charged with provocative commentary on issues such as architecture's ability to alter the course of history, the failure of modernism as a catalyst for social change, and the frustration and decay of 20th-century utopias.

In his work, Garaicoa explores the sociological and psychological impact of utopian spaces. He investigates notions of idealized societies in Campus o la Babel del conocimiento (Campus or the Babel of Knowledge) (2002â€“04), a sculpture of an eerie yet beautiful university campus and building. Despite its highly structured and technologically advanced environment, the building is a place of confusion rather than a temple of higher learning. La habitaciÃ³n de mi negatividad (II) (The Room of My Negativity (II)) (2004) is a video installation that revisits some of the artist's reflections on failed utopias previously explored in The Room of My Negativity (I) (2003), and Because Every City Has the Right to Be Called Utopia (2002) is a large-scale wall drawing of an architectural structure made with thread and pins.

Interested in urban planning and a city's architectural social fabric, Garaicoa often illustrates his vision in large installations using various materials, such as crystal, wax candles, and rice-paper lamps. One such installation is De la serie Nuevas arquitecturas (From the series New Architectures) (2003), a floating, futuristic-looking city consisting of 76 rice-paper lamps gathered in clusters. Softened by the density of the white rice paper, the glowing lights project a fictionalized vision of a city that contrasts with the reality of urban centers around the world.

Cuban lifeâ€”social, political, and culturalâ€”inspires Garaicoa's work. A tribute to one of his childhood heroes, Capablanca's Real Passion (2004) is a sculpture inspired by Cuban icon and World Chess Champion JosÃ© RaÃºl Capablanca. The work consists of a chessboard where the pawn, rook, knight, bishop, queen, and king are transformed into miniature buildings. The board changes when the player moves a building, thus changing the cityâ€™s urban composition with every move and creating an endless number of new cities. Making architecture and intellectual skill the foundation of the work, Garaicoa draws a parallel between the requirements to win a chess game and those necessary to govern a country.

After the Cuban revolution in 1959, many architectural projects and buildings were left unfinished or abandoned in Havana as well as in other Cuban cities. Garaicoa creates a series of pop-up books depicting the decrepit turn-of-the-century buildings in Havana's Plaza Vieja district and buildings in other cities in Towers; Plaza Vieja, Habana; Minneapolis, Mills; and New Projects (2004). In his photography series Sin tÃ­tulo, (Arcos madera) (Untitled, Wood Arches) (2003â€“04); Sin tÃ­tulo, L.A (Untitled, L.A) (2004); Sin tÃ­tulo, EspigÃ³n (Untitled, Pier) (2001â€“04); and Sin tÃ­tulo (Edificio neoclÃ¡sico)/ Untitled (Neoclassical Building) (2002â€“04), Garaicoa addresses the collapsed buildings in Havana by pairing black-and-white photographs with drawings made of thread rendering the reality of the absence of these structures.

About the Artist
Garaicoa was born in Havana, Cuba, in 1967, where he currently lives and works. He studied thermodynamics at the Instituto TÃ©cnico Hermanos GÃ³mez and studied visual arts at the Instituto Superior de Arte in Cuba from 1989 to 1994. Although never formally trained as an architect, he has been an active observer of architecture and has applied this discourse to his artwork.

Publication
In conjunction with the exhibition at MOCA, Galeria Continua in Gimignano, Italy, is publishing an updated version of the 2004 catalogue Carlos Garaicoa La Misura Di Quasi Tutte Le Cose [The Measure of Almost Everything]. The publication includes essays by Lorenzo Fusi, Adriano Pedrosa, and Orlando HernÃ¡ndez, and a new essay by MOCA Associate Curator Alma Ruiz. It also includes a complete illustration of Garaicoa's most recent projects, making it the most comprehensive publication of his work to date.

Public Programs
Art Talks
Art Talks are informal discussions on current exhibitions led by arts professionals. The talks take place in the exhibition galleries unless otherwise noted. Attendance is free with museum admission and no reservations are required. The Art Talks series is made possible in part by The Times Mirror Foundation Endowment.

Funding
Carlos Garaicoa is made possible by the generous support of the Jumex Fund for Contemporary Latin American Art; the Katherine S. Marmor Award; David Hockney; Jennifer McSweeney and Peter Reuss; and the City of West Hollywood.