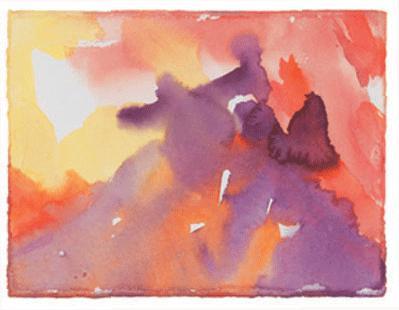 This is the first time that two complementary exhibitions in Berlin will be paying tribute to the extensive work of GÃ¼nther Uecker. The show of work has been initiated and organised by the Neuer Berliner Kunstverein and will give an impression of five decades of work by one of the most significant, diversely productive artists of his generation. It will be possible to see a cross-section from all the artistâ€™s creative periods in the Martin-Gropius Building from 11th March to 6th of June 2005. The exhibition was conceived by Alexander Tolnay, the director of the Neuer Berliner Kunstverein (NBK).

One highlight is the installation Friedensgebote (Commandments of Peace). Uecker created this work investigating the three world religions especially for the exhibition in the Martin-Gropius Building. The show will be supplemented by a comprehensive collection of 250 largely unknown watercolour works by GÃ¼nther Uecker, to be seen in the Neuer Berliner Kunstverein from 12th March onwards. This is the first exhibition ever to concentrate exclusively on the artistâ€™s very personal, rarely shown watercolours, most of which he produced when travelling. Ueckerâ€™s watercolours represent an obvious contrast to his previously known work and enable us to glimpse the artistâ€™s rather quiet and sensitive side; he is well aware of the vulnerability of nature and mankind. The final link in this series of exhibitions is the installation SandmÃ¼hlen â€“ Zeitspiralen (Sand Mills â€“ Time Spirals), a work in the custody of Britta Schmitz, located in the central entrance area to the Neue Nationalgalerie. In a dialogue with the austere beauty of the architecture of Mies van der Roheâ€™s building, Ueckerâ€™s pieces - created from the sand of the Mark Brandenburg - form a unity that could almost be termed meditative.

GÃ¼nther Uecker (born 1930) is one of the most significant, internationally acclaimed German artists. He has taken part in important, large-scale international exhibitions such as the Venice Biennial and the documenta, and has received numerous awards, including the Kaiserring from the city of Goslar and â€“ quite recently â€“ the Order Pour le MÃ©rite in Berlin. Large retrospective exhibitions dedicated to the artist and his work have been shown in Moscow, Vienna and Munich during the past decades.

GÃ¼nther Uecker will be celebrating his 75th birthday in March.

Two comprehensive catalogues will be produced by Hatje Cantz publishers to accompany the exhibition.

The exhibition is being supported by the Hauptstadtkulturfonds; the main sponsor is the Deutsche Bank.