Hernan Bas: In the Low Light. This body of work subtly considers contradictions in perceptions of morality, addressing artist's own notion of 'hell'. David Harrison is an artist attracted to the day-to-day oddities that are often overlooked by most people; his paintings are populated by fantastical characters. Christian Holstad, Beautiful Lies You Could Live In: clipping images from newspapers and first rubbing areas out, leaving in their place blank, haunting suggestions of forms. 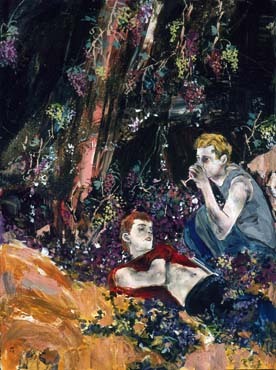 In the Low Light

"Sometimes it is so light. That hurts my eyes. And it's too many lamps - little sparkles all over, up high, and large ones that are dreadful. They could fall on me, you know." - Mark Twain, Letters from the Earth

Victoria Miro Gallery presents a new series of work by Miami-based artist Hernan Bas in his first solo exhibition in Europe. Titled In the Low Light this body of work subtly considers contradictions in perceptions of morality, addressing Bas's own notion of 'hell'. As the artist describes, "this is not the hell popularized by Dante or Bosch, but rather a vision of a territory that, even if dark at times, allows for a bit of light."

For this series, Bas has worked with the idea that concepts of hell are very personal. Here, Bas takes as a point of reference the charged cultural climate of 1960s San Francisco, where a church was founded for which 'hell' actually meant 'heaven'. To the members of the Church of Satan, hell consisted of absolute freedom and permitted a sense of abandon heaven would not allow. Hell was considered a place for artists and outcasts, a place to frolic, indulge and love whomever one wished, and offered a refuge from a perceived 'purity' of heaven. Out of a personal alignment to what is in certain circles considered 'sinful' behavior, Bas has produced works that illustrate his 'hell': a realm where darkness and light are not necessarily at odds with one another and there are no swift distinctions between the 'good' and the 'bad'.

Informed by historical painting and literature, Bas's atmospheric works suggest a fluid, unpredictable time before dawn or at dusk, in which fantasies are played out through posturing or transformation. Decadent dandies, teenage waifs, languid loners and dashing adventurers are some of the characters that populate Bas's ongoing narrative. His works resist a pinning down of time or place, with historical imagery layered with references to contemporary fashion and Bas's invented mythology. Suspenseful and infused with a sense of longing, the works explore implications of love, desire and queer culture through a dreamlike romanticism and wistful nostalgia.

Hernan Bas, born in 1978, is a recent graduate of the increasingly influential New World School of the Arts in Miami, and is part of the burgeoning Miami art scene. His work will be featured in Ideal Worlds: New Romanticism in Contemporary Art at the Schirn Kunsthalle, Frankfurt from 12 May - 28 August 2005. Bas was first shown at Victoria Miro Gallery in the exhibition Painting 2004. He was featured in the 2004 Whitney Biennial at the Whitney Museum of American Art, New York, and has had solo exhibitions at The Moore Space, Miami, Daniel Reich Gallery, New York, Fredric Snitzer Gallery, Miami, and the Museum of Contemporary Art, North Miami, Florida.

Harrison is an artist attracted to the day-to-day oddities that are often overlooked by most people. His paintings are populated by fantastical characters and wildlife placed in eerie, otherworldly settings. Taking traditional subjects of landscape and myth the artist creates magical tales that are relevant to our time and make strange our relationship to the natural world. Fairy tales have been an important influence in Harrisonâ€™s work from Alice in Wonderland, The Master and Margarita and Gogolâ€™s short stories to British writers such as Cowper-Powis, Mervyn Peake and Henry Williamson. In all these stories, as in Harrisonâ€™s paintings, the natural and supernatural go hand in hand.

Harrisonâ€™s works are created on surfaces ranging from rough wooden panels to larger canvases and vary from intimate, naturalistic studies to elaborate compositions. They are unified by Harrisonâ€™s approach, which combines the fantastical with the real, the magical with the everyday. His paintings often tell of manâ€™s impact on nature and of nature settling scores in elaborate twists of fortune. Surrounded by the dirt, detritus and blighted urban decay of humanity, his creatures inspire a sense of wonder and remain powerful witnesses to manâ€™s vanity and foolishness. Central to Harrisonâ€™s iconography are birds which, as the artist remarks, â€œprove their superiority over mankind, as we set about destroying the planet, they fly like jewel coloured fairy folk, amongst the debris of urban life, heralding sanctuary for the rest of nature to begin its clean up process. They make their home amongst us â€” from the spire of a gothic cathedral, under the eaves of an ancient cottage, or from the top of a giant skyscraper, amidst the shards of concrete, shooting up at jagged angles towards heaven - this is how fairy stories are born: from true magic mixed with the absurdities of lifeâ€.

Beautiful Lies You Could Live In

In the project space, Victoria Miro Gallery presents a new installation by New York-based artist Christian Holstad, titled Beautiful Lies You Could Live In. This installation foregrounds a mode of art making Holstad developed and is continually engaged with: clipping images from newspapers and first rubbing areas out, leaving in their place blank, haunting suggestions of forms. To these Holstad adds drawn elements, poetically emphasizing or dramatizing human features both imagined and real. Holstad's technique destabilizes our experience of media imagery, transforming everyday pictures into insightful and highly personal commentaries which are at times somber, at times celebratory. Together with the works on paper is a hand-sewn soft sculpture of two intertwined snakes - a male and a female - decadently dressed, offering a wry statement on the privileged social systems media imagery exploits.

Born in 1972 in Anaheim, California, Christian Holstad lives and works in New York. In the last year, he was featured in the 2004 Whitney Biennial at the Whitney Museum of American Art, New York, presented a solo show at Kunsthalle Zurich, and had a Project Room show at P.S.1 Center for Contemporary Art, Long Island City, New York. Holstad has also had recent solo exhibitions at Hiromi Yoshii, Toyko, Daniel Reich Gallery, New York, Galeria Massimo de Carlo, Milan and has performed in various venues as a member of the Black Leotard Front.