Ben Carter, Jacob Dahl Jurgensen, Luc Delahaye, Charles Gaines, Felix Stephan Huber, Mike Kelley, Alice Maude-Roxby, Jerry McMillan, Ivan Razumov, Ed Ruscha, Corinne Wasmuht. The exhibition responds to the context in which the artists of the gallery move: each artist of the gallery invited an artist who is important for their work â€“ either as a role-model, inspiration or friend. 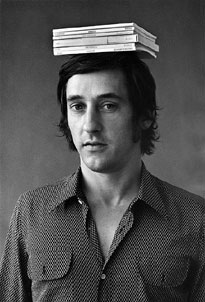 Supported by the British Council

Galerie Kamm is pleased to present the group exhibition â€œRelationsâ€. The exhibition responds to the context in which the artists of the gallery move: each artist of the gallery invited an artist who is important for their work â€“ either as a role-model, inspiration or friend.

Ben Carter (invited by Albrecht SchÃ¤fer)
In his sculpture, Ben Carter combines two materials which resemble each other in their structure and colour: stone, a petrified biomorphic form, and concrete, which corresponds to an industrial norm. He doesnâ€™t want to produce a specific object, nor a formal sculpture, nor a use-object, although the process has the simplicity of an industrial procedure, and the result could be part of an indefinitely extendable system. Instead of this he is interested in the unexpected in the transferral of a material from one arbitrary place to another. This produces a new subjective grammar of material, which opens up questions about form, sculpture, norm, uniformity, subjectivity and its metamorphosis.

Jacob Dahl JÃ¼rgensen (invited by Simon Dybbroe MÃ¸ller)
Jacob Dahl JÃ¼rgensen works with sculpture, collage and installation. His work often brings together references to utopian and early Modernist art and design, New Age and occult iconography, as well as popular culture. â€˜As above, so belowâ€™ (2005) is a constructivist sculpture of interpenetrating planes made from clear and mirrored Perspex, approximating the shape of a hexagram. The sculpture functions as a candleholder for coloured and scented New Age-style candles, running down the sculpture. The title of the piece is taken from the Hermetic axiom â€˜That which is above, is the same as that which is belowâ€™, of which the hexagram is the occult symbol. The phrase is ascribed to the ancient magician Hermes Trismegistus, and is believed to hold the key to all mysteries. â€˜Crystal Ballâ€™ (2004) is a geometrical and odoriferous sculpture made out of incense sticks. The structure is called an icosahedron in math-speak, a grid model of the last of the five Platonic Solids. It refers to the geodesic spheres and domes pioneered by the technocratic utopian, R. Buckminster Fulller, but is made of the controversial Indian guru Sai Babaâ€™s own brand of incense sticks.

Luc Delahhaye (invited by Ulrike Feser)
The photographer Luc Delahaye has been en route in war and crisis zones since 1989. He is mainly in search of immediate existential moments. His documentary photography tends to be more personal compared to a photojournalistic tradition which regards its activity as part of a general enlightenment. The photograph â€œFighting the Talibanâ€ from 1996, shows a battle scene in which the photographer is directly involved. The journalistâ€™s apparatus records the effects of the war that is taking place, however includes a strange abstracting moment in the image. â€œI always thought that whoever takes the risk, thereby pays their entry ticket.â€ Luc Delahaye, in: Kunstforum. Vol. 165, 2003, p. 181.

Charles Gaines (invited by Edgar Arceneaux)
The riddle lying behind homicide in the USA is the starting point for the Charles Gainesâ€™ 1994 series â€œCapital Crime and the Night Skyâ€. In the first picture are two re-photographed images which show the scene of a crime as well as the police photo of a murderer or murder suspect, brought together with the image of a night sky. This depicts the sky over Los Angeles on the same day in which the murder happened, 2nd September 1973, though dated 50 years later. If particular constellations reappear cyclically, is there a chance that events on earth, for example a crime, could take place again during a similar constellation? Gaines plays with the collective fears and myths which grow up around the themes of murder and cosmology. His systematic approach, in the tradition of concept art, plays with the tension between consistency/logic and chance, between fate and contingency. Ludwig Seyfahrt in: Recherche â€“ entdeckt! Bildarchive des Unsichtbaren, ed. by Andreas Baur with Ludwig Seyfahrt, Frankfurt/M. 2004)

Felix Stephan Huber (invited by Zilla Leutenegger)
The black and white photocopy by Felix Stephan Huber comes from the work â€œa-sideâ€. With the media video, photo and photocopy he makes one of his typical stage-like but fragile, open arrangements, which permit multiple views. Housing developments and fragments of nature evoke a border zone. The transition from urban space to periphery is shifted to centre stage. The black and white photocopy shows a person in a parked car somewhere in the non-place of a landscape in Berlinâ€™s outskirts. Huberâ€™s attempt to grasp and find a visual counterpart to the yearning and unfathomable is exemplary. The inherited notion of finding identity in nature and the search for the whole is referred to by the choice of motif and the fragmentary character, and at the same time levelled. In the foreground is the fleetingness and randomness of the perceived and the question of constructions of reality.

Mike Kelley (invited by Katharina Jahnke)
Mike Kelley is showing silk banners come from the 10-part series â€œPansy Metal/Clovered Hoofâ€. Mike Kelley, whose work constantly questions symbols of private and cultural identification, refers in this series to his Irish-American/Catholic background. Above all the banners recall trophies and keepsakes as for example in rock concerts where they are treated as souvenirs, and carry out Kelleyâ€™s typical tightrope-walk between high and low culture to the last detail: the trashy/banal symbols, martial/gothic lettering and venerable/aggressive poses merge on a silk material that seems totally absurd for this. The wide spectrum of sources and artistic methods, the proximity of beauty/pathos and grotesque becomes clear considering the original presentation: The banners were presented for the first time in 1989 during a performance with heavy metal music. At the same time the theme â€œfan cultâ€ and its ironic celebration becomes a commentary to the exhibition.

Alice Maude-Roxby (invited by Cornelia Schmidt-Bleek)
Alice Maude-Roxby works as an artist and a writer. The focus of the exhibited photo/text work was sparked by a trip to Burgundy where she met and interviewed the now retired photographer, FranÃ§oise Masson. Masson was a commercial photographer who produced images for many different contexts and advertising campaigns. She also documented the 1970s actions of the high-risk performance artist Gina Pane. And it was due to an interest in these particular images that Maude-Roxby traced Masson. During their time together in Burgundy, Masson took Maude-Roxby to the locations where Pane had made non-public performances. These locations were also used by Masson as a backdrop for commercial photographs. The exhibited work brings together photographs from these very different contexts. The texts revolve around the crossover between art and life in the experience of the photographer. These texts have been published in full in Maude-Roxby and Massonâ€™s co-authored book On Record: advertising, architecture and the actions of Gina Pane published by Artwords in 2004. The photographs of the actions of Gina Pane are exhibited courtesy of Anne Marchand. All of the exhibited photographs were taken by FranÃ§oise Masson.

Jerry Mc Millan/Ed Ruscha (invited by Annette Kisling)
Ed Ruscha and Jerry McMillan knew each other since High School and in the late 50s moved together from Oklahoma City to Los Angeles. Over the years Jerry McMillan made an extensive series of portraits of Ed Ruscha. These consist partly of snap shots, partly of staged photographs. The 1970 portrait â€œEd Ruscha with six of his books balanced on his headâ€ humorously evokes the supposed identification of the artist with his work. Between 1963 and 1978 Ed Ruscha produced 16 books in total. He had the books produced in large editions to consciously avoid them being perceived as exclusive art objects. The books have titles like â€œTwentysix Gasoline Stationsâ€, â€œSome Los Angeles Apartmentsâ€, â€œEvery Building on the Sunset Stripâ€ or â€œThirtyfour Parking Lots in Los Angelesâ€.
The thematic ordering is a means to increase the multiple meanings of the images. The permanent repetition of a motif demonstrates Ruschaâ€™s interest in the presence of the everyday, of the given. For the shots of the parking lots, Ed Ruscha hired a pilot and a photographer. Ruscha is not interested in a subjective artistic gesture, much more in the serial registering of the mass cultural phenomena surrounding him. Â»Pools came when I was swimming every day and Parking Lots when I felt like being aerial.Â« Ed Ruscha, 1973

Ivan Razumov (invited by Pavel Pepperstein)
Ivan Razumov, who works in the tradition of the Russian Conceptualists, is showing works from the series â€œPioneersâ€. When the Soviet Union, and with it the ideological symbolism, collapsed at the beginning of the 90s, a new consciousness developed which was positioned between childhood in a totalitarian state and a developing world of consumerism and high-tech. The consciousness of being part of a new culture brought about the movement of the Russian Conceptualists to which Razumov belongs. The object of his research is the collective memory of Russia. â€œOnce, having assumed responsibility for the figurative content of the present culture and its consequences, I reissued the images that had been lost or thrown out together with old abc-books, while society was making the dizzy and breathtaking jump from the past of the empire of evil to the future of the third world. Gently restoring these icons and visions of the come-true global revolution, I let myself recover them with the same changes I had already made, being a school hooligan. But this time these changes only made the images ready for consumption by the recipients of today who absorbs them, often neither finding a bomb inside, nor recognising the deja vuâ€œ. Ivan Razumov

Corinne Wasmuht (invited by Gabriele Basch)
Corinne Wasmuhtâ€™s painting developed under the dualism of a strict conceptual construction on the one hand, and painterly processes on the other. For her pictorial ideas, Corinne Wasmuht collects images from the every day, science and art in order to produce a new whole. â€œwithin specific thematic guidelines, the material (...) is examined in constantly new approaches to its complexity and its possible content. It is not therefore the recording of an image-stream, but the construction of an image-cosmos. This is however brought about using painterly means, the means of a traditional, disciplined painting method, which comes from a completely different time, and which seems to be obsolete. A contemporary life experience influenced by advanced technology is â€“ in what at first seems a paradoxical way â€“ operated on using an anachronistic instrumentâ€ Julian Heynen, Augen-Puls, in: Wasmuht-Gerwers-Skreber, ars viva 96/97Malerei, pub. vom BDI e.V.

Image: Jerry McMillan, "Ed Ruscha with six of his books balanced on his head", 1970