Left Behind. Photographs of artist's born again Christian family are juxtaposed with images of domestic narratives, inspired by childhood and adult life experiences. The result is an unsettling world involving complacency, control, and belief. In the project room: Test Run, a new video by Alex McQuilkin. 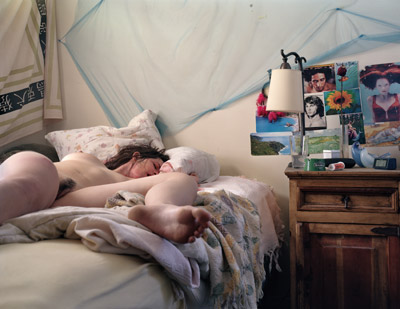 Photographs of Strassheimâ€™s born again Christian family are juxtaposed with images of domestic narratives, inspired by childhood and adult life experiences. The result is an unsettling world involving complacency, control, and belief. Her images vacillate between what is immediately revealed on the surface and the unsettling nature of what is discovered upon further inspection. The combination of the visually seductive surface with the seemingly banal subject matter elicits an involved interpretation of the many layers within the images. These narratives and portraits retain an element of mystery that asks the viewer to question the acts that lead up to or follow each scenario.

Drawing from her experience as a forensic photographer, Angela Strassheim has developed a style remarkably original in its obsessively careful compositions and lighting, in its uncanny sharpness. Apparently simple scenes acquire a suspended atmosphere, in which religion, suburban life and personal memories converge.

Left Behind refers not only to the â€œunsavedâ€ spoken about by her born again Christian family but also the memory and evidence people create that outlives them. It is both, being left behind and leaving, either of our own free will or having life taken away.

Angela Strassheim received her MFA in photography from Yale University in 2003. She received a Forensic & Biomedical Photography Certification from the Forensic Imaging Bureau. This will be her first solo exhibition.

In the project room, Marvelli Gallery is pleased to present â€œTest Runâ€, an exhibition of American artist Alex McQuilkin. The exhibition will feature a new video.

Alex McQuilkin received her BFA from New York University in 2002. In the past few years, she has exhibited extensively in Europe: Berlin (Voelker & Freunde Galerie), Frankfurt (Galerie Adler), Copenhagen (Gimm Eiss) London (Ritter/Zamet), and Madrid (Carmen De La Guerra), among other venues . This will be her first solo exhibition in New York.

Marvelli Gallery
526 West 26th Street
Second Floor
New York
The Gallery is open Tuesday through Saturday from 10 am to 6 pm. Other times by appointment.