Twenty-eight works from his Gluts series, produced in 1985 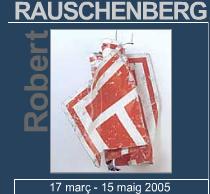 In connection with the fifth award of the Julio GonzÃ¡lez Prize, the IVAM is presenting an exhibition to pay tribute to the winner of the prize in 2004, Robert Rauschenberg. Twenty-seven works from his Gluts series (1986 95) have been selected by curators Susan Davidson and David White to reveal to the public the essence of Rauschenberg s art: placing commonly used objects into new contexts. The catalogue published to accompany the exhibition contains illustrations of the works exhibited and includes an essay by Rosetta Brooks and a chronology written by Susan Davidson.

Robert Rauschenberg bases his work on two fundamental principles of modernism: collage and the ready-made. With these words Armin Zweite introduces two essential concepts which help us to define Rauschenberg s art as a descendant of the tradition of Dada, Duchamp and Schwitters, in the context of the hegemony of Pop Art in the sixties. He created the Gluts series after discovering the harsher, more dispiriting side of Texas, where he had lived as a child. The economic crisis brought about by overproduction of oil, far exceeding the demand, produced devastating effects which Rauschenberg sought to reflect in these works. The crumpled remains of traffic signs, car number plates, petrol price signs and other detritus that Rauschenberg came across in junkyards form these reliefs and sculptures which he himself defined as souvenirs without nostalgia . The Gluts series gives the public the opportunity to view everything in terms of its many possibilities of existence in other words, to debate about the future and look forwards.

Born in 1925 in Port Arthur, Texas, Robert Rauschenberg began studying pharmacy at the University of Texas in 1942, but gave up his studies to serve in the United States marines. In 1947 48 he studied various subjects, including art history, sculpture and music, at the Kansas City Art Institute. In 1948 he attended the AcadÃ©mie Julian in Paris, where he met Susan Weil, later to become his wife. On returning to the USA he studied under Josef Albers at Black Mountain College, North Carolina, in 1949, where he met the choreographer Merce Cunningham and the composer John Cage, with both of whom he later worked closely. That year he moved to New York and enrolled at the Art Students League, where he remained until 1952. He designed window displays for Bonwit Teller and Tiffany, and in 1951 he presented his first solo shows. He returned to Black Mountain College in 1952. He subsequently travelled in Italy, France and Spain, and in 1953 he presented an exhibition in Florence and Rome. That year he settled in a studio in New York and began to paint his red paintings, which took over from his white and black paintings.

Between 1954 and 1965 he worked more intensely for the Merce Cunningham Dance Company. In 1955 he found a studio in the same building as Jasper Johns. In 1958 he presented his first solo exhibition at the Leo Castelli gallery and did drawings to illustrate Dante s Inferno. The following year he took part in Documenta 2 in Kassel, and in biennials in Paris and SÃ£o Paulo. During this period he made the acquaintance of Marcel Duchamp. Rauschenberg was the first artist to use the silkscreen technique on canvas, combining painting, bricolage and glued objects, in 1962, when he also did his first lithographic works, for which he was awarded the Grand Prize in Ljubljana. The following year he had his first retrospective in Europe, at the Galerie Sonnabend in Paris, later shown at the Jewish Museum in New York.

The Whitechapel Gallery in London organized a major retrospective in 1964, and that year he was awarded the Grand Prize at the Biennale di Venezia. Subsequently he accompanied the world tour of John Cage and the Merce Cunningham Dance Company. In 1968 the NASA invited him to witness the launch of Apollo 11 at the Kennedy Space Center, and he used this theme in his work. In 1970 he established the foundation Change Inc. to help destitute artists, and the following year he provided a building with studios for artists in Florida. In 1974 he collaborated with writer Alain Robbe-Grillet and travelled to Israel and India. In 1975 he was awarded an honorary doctorate in Fine Arts by the University of Tampa, Florida.

A major retrospective of his work visited various American cities between 1976 and 1978. In 1980 retrospectives were presented in Berlin, DÃ¼sseldorf, Copenhagen, Frankfurt, Munich and London. In 1981 the Pompidou Centre in Paris exhibited his photographs. He lives in New York and Florida.