Vacuum Room. His installations incorporate mix performance, theater, sculpture and video art. He stages situations that involve groups of people with scenes that puts us in mind collective archetypal images: a riot, a crash of the stock market, waiting refugees, or a scene of pillaging. In his video installations, Mik drops us right into a middle of some critical situation whose causes are always unknown to us and whose effects are never revealed. 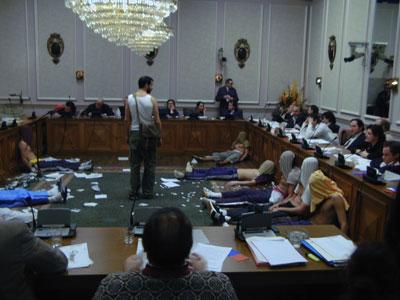 The Centre for Contemporary Images is proud to present the latest work by Dutch artist Aernout Mik, Vacuum Room (2005). Aernout Mikâ€™s installations incorporate mix performance, theater, sculpture and video art. He stages situations that involve groups of people with scenes that puts us in mind collective archetypal images: a riot (Glutinosity, 2001), a crash of the stock market (Middlemen, 2001), waiting refugees (Flock, 2002), or a scene of pillaging (Pulverous, 2003).

The people in his films seem to be in their proper place, exactly where they should be, until in the course of observing them we discover certain details that donâ€™t quite fit, behavior that is inadequate and unexpected. Indifferent, Mikâ€™s camera passes over these incongruities, neutralizes tham, and brings us back to a reality that is more reassuring, until still other oddities surface in the image. Thus, we are constantly veering back and forth between realism and fiction.

In his video installations, Mik drops us right into a middle of some critical situation whose causes are always unknown to us and whose effects are never revealed. We are transported to a space where time is drawn out and any plot has been obliterated; there is neither beginning not end, only the perception of the passage of time and a state of being.

With this new work, we enter the setting of a meeting room and watch as some 30 politicians debate while seated behind their desks.The image (the sound has been cut) show us discussions that seem to be quite raucous, with participants attempting to make themselves heard and vote, leaving the room and coming back.

Over the reigning disorder is superimposed the arrival of a group of young protestors who occupy the center of the room and find themselves separated from the political community by a barrier of furniture. They impose a protest on this deteriorating atmosphere but it, too, proves just as wild and anarchic. As both groups clash, more and more a frozen vacuum evolves where all people and space seems to merge in one another. Resulting in unexpected moments of quiet equilibrium in the space. Two groups, clearly distinguished by separate fashion codes and supposedly in conflict, reveal similar behaviors in the end, incomprehensibble but clearly visible to the viewer and doomed to come to nothing. The space itself grows disorganized in the face these contradictory impulses, then is restructured, or remains frozen, symbolizing the impasse that exists in the two parties and in the dynamics between the two parties.

The performance brought together around 50 professional and non-professional actors, who were filmed with six surveillance cameras. Outside of their context, in a place reserved for public debates, these cameras offers us circumscribed points of view and hence a fragmentary view of the situation. Normally in the artistâ€™s films movement of the camera is worked out in advance. The slow tracking shots and the shifts forward and backward are deliberately planned in order to act upon the viewerâ€™s perception. Here the cameras were all programmed to change frame at the same time, filming with the same degree of attention now the setting and the space, now the intense action playing out there.

Viewers are completlely immersed in the action , and are not able to control the whole scene, as are the actors within it. Surrounded by six projections, they physically experience the moving image and, plunged into the heart of the debates, are led to wonder about their role as universal citizens.

Vacuum Room is a co-production of the Centre for Contemporary Images, Saint-Gervais and Argos, Brussels, with the help of Berlin Beamsystems, Amsterdam.

At the same time at the Centre for Contemporary:

"The passion for order, codes, and rules is switched on by the anarchy of the gray matter, the free gesture..."

The above phrase, which refers to the painting of Paul Viaccoz, is just the thing in fact to begin an attempt to describe the artist s current work.

Scale models built like little theaters and furnished with chairs, tables, or rigorously aligned beds are made to come alive with moving images. Between the exemplary organization of the different pieces of furniture, each executed with the meticulousness of a watchmaker, and the disorder emanating from the films shown inside the models, the contrast is indeed striking.

What are these films about? Dreams, fits of madness, fantasies? Viaccoz, the undisputed hero of each episode, really goes to town. With impish pleasure he puts himself in the role of the hero, not the kind seen on TV, but one that is a perfect match for the hero each of us dreams up as a kid, the hero that allows us to spice up our daily life and transform our misery into marvelous adventures. It is a ridiculously human hero whose mission is not to save the world, but simply to face his own fears. For Viaccoz the hero, it s more his compulsions and dread he has to face.

Paul gets off on his own escapades. He assumes several roles (magician, killer, pratfaller, mushroom hunter, etc.) and the action progresses in a whimsical way. There is no dramatic resolution strictly speaking, but rather a moment of lucidity when, like a dreamer awakening, you open your eyes and say to yourself, Whew, that s over with, Paul is safe.

Safe from his demons? The artist invents a world that would, without his sense of humor, lead us smack into the field of psychiatry. Those spare rooms where nothing is left to chance, where everything is measured, speak of incarceration and shutting up. They flaunt their ambition to regulate the overwhelming flood, but clearly can t halt the explosion of images haunting them.

The spare character of these room-cells, which fixes their identity while depriving them of it, conjures up the world of prisons and psychiatric wards, even concentration camps. Fascinated by rules because they guarantee order, Viaccoz makes his way over a terrain the underside of which he well knows. Order is synonymous with fussiness in the extreme, that is, a retreat into oneself, or it brings together the conditions for the advent of a surveillance state. Viaccoz thus frantically sets about creating distractions that breach this ominous organization and infiltrate the processes of imprisonment at work here.

The Centre for Contemporary Images will be showing for the first time a series of videos produced between 2001 to 2005, along with several of the artist s scale models.