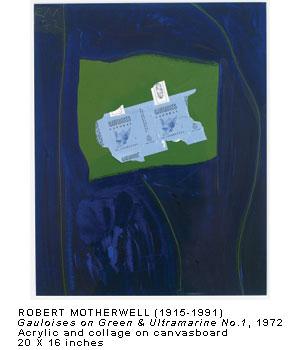 Since 1997, Pavel Zoubok Gallery has exhibited the work of contemporary and modern artists with a particular focus in the field of collage, assemblage and mixed media installation. Over the years the gallery's exhibition program has expanded to include paintings and drawings by artists whose work embraces a montage, or collage aesthetic. After three exciting years in Soho and three on the Upper East Side, Pavel Zoubok Gallery is celebrating its first year in Chelsea with the exhibition COLLAGE: signs & surfaces. This survey, which borrows its name from author Wendy Holmes' 1989 essay on the semiotics of collage, brings together seventy-seven works by a distinguished group of European and American artists who, both individually and collectively, challenge our perceptions about the medium.

Perhaps no art form expresses the character of the twentieth century and the contemporary moment with greater clarity and immediacy than collage. Narrowly defined, collage is the construction of images through the deceptively simple act of pasting cut or torn papers. The term derives from the French word coller, meaning to glue, paste, or stick. Collage, however, is much more than a medium for making pictures. It is a mode of perception, a multi-dimensional language with aesthetic implications that span the histories of art, architecture, literature, and music. In the visual arts collage first emerged as a fine art medium in the papier colles, or pasted papers of the Cubists Georges Braque and Pablo Picasso. Since then, it has played a vital role in almost every phase of Modernism. Its influence is most poignantly reflected in Italian Futurism, Constructivism, Dada, Surrealism, Pop Art and Fluxus. Of the many modern masters who worked in collage, however, only a handful can be considered collagists in the fullest sense. Artists such as Kurt Schwitters, Hannah Hoch, Max Ernst, Marcel Duchamp and Joseph Cornell, to name but a few, changed the face of Modernism by asserting that art could indeed be made from almost anything. Even the pictorial purity of Abstract Expressionism could not evade the powerful allure of collage. Robert Motherwell, Lee Krasner and Anne Ryan used collage to expand the practice of abstract painting.

While the Modernist period saw only a handful of bona-fide collagists, numerous artists working today have made collage, and by extension assemblage and mixed-media installation, their primary visual language and continue to explore and expand its boundaries. The evolution of the collage aesthetic has had an equally important effect on contemporary painters who look to it as a conceptual and/or visual model. The incorporation of montage imagery in drawing and painting has helped to redefine what a collage can be, or become.

With an immediacy that is distinct from other art forms, the collagist confronts us with a vision of the world that is literally constructed from the physical context of his/her own life. Found images and objects function as signifiers of both individual and collective experience. By incorporating materials that are inextricably linked to the realities of daily life, the artist establishes an immediate identification, both real and imagined, between the viewer and the work of art. The simplicity of the collage process adds to this sense of immediacy and spontaneity. The basic principle of juxtaposition forms the foundation for an art of limitless associative possibilities. Collage allows us to explore simultaneously the mysterious spaces between high art and popular culture, text and image, figuration and abstraction, past and present, two and three-dimensional space.