Living and working in Vienna

The group exhibition reflects on cultural and spatial memory as shaped by film, art, architecture, and global industries of image making. While each of the selected works considers specific locations, histories, and cultural genres, each also animates a translocal dialogue. Works by ten artists curated by Trevor Smith 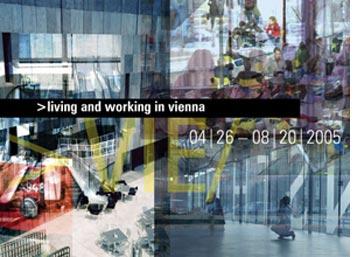 The group exhibition, curated by Trevor Smith, curator of the New Museum of Contemporary Art in New York, features artists who live and work in Vienna. LIVING AND WORKING IN VIENNA reflects on cultural and spatial memory as shaped by film, art, architecture, and global industries of image making. While each of the selected works considers specific locations, histories, and cultural genres, each also animates a translocal dialogue that complicates our sense of what it means to live and work in Vienna today.

Marko Lulic's Hart und weich Nr.2 (Hard and Soft; 2002) is a representation of the organic swimming pool architecture from the Hotel Haludovo Complex, built in 1971 in Croatia, Yugoslavia, and co-financed by Bob Guccione, the publisher of Penthouse magazine. Lulic"s installation also includes a film by Dejan Karaklajic and Jovan Acim documenting the opening of the complex mi ne prodajemo holivud (1971).

Carola Dertnig also draws on genre conventions and links historical periods in her drawings and videos. Her video Strangers (2003) is one of a group of short videos that she describes as slapstick. A woman, Dertnig herself, descends an escalator in a train station and passes through the lobby leaving a long red stocking in her wake. Some travellers look on bemused and others ignore her.

David Moises"Wobbels (2004) are sculptures that also function as seating. Large tubular forms are connected by tubes to create a pneumatic system. The forms react to differences in pressure produced when people sit on them.

Sabina HÃ¶rtner"s drawings Twins 01 and Twins 02 (2002) appear to engage directly with an international history of abstraction, yet her work is always informed by specific physical spaces. While the Twins were not created for the Austrian Culture Forum, they are positioned in such a way that they mirror the architecture and play out a kind of dÃ©ja vu with each other and the setting.

Josh MÃ¼ller"s new video Algen (2005) premiering in this exhibition is a meditation on memory and decontextualization based on a fragment from Andrei Tarkovsky"s 1972 film Solaris.

Klaus Pobitzer"s drawings are at once recognizably individual people and yet abstracted through an engagement with illustrative conventions. His drawings scale the human body up to the size of buildings and point towards an interior or psychological relationship to architectural space.

____fabrics interseason"s constructed normality: promesse du bonheur (2002) is a poetic reflection on their first intervention in the Paris fashion shows. Rather than having a traditional show, they staged demonstrations as people lined up to see other designers" shows. Their intervention introduces moments of anarchic beauty through creatively working with their outsider status.

In cooperation with KUNSTHALLE wien

We gratefully acknowledge the support provided by Zumtobel Lighting and Austrian Airlines.