The paintings and drawings included in the show expand on the artist's well-established vocabulary of images, which often convey alternative ideas about social order and gender concerns. Eisenman's visual fantasies are expert in exposing the flaws of the modern life. The show also delves into the grotesque in the guise of satire and caricature. 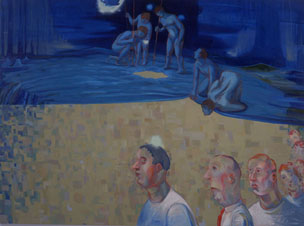 Galerie Barbara Weiss is pleased to present works by the American artist Nicole Eisenman. It is her first solo exhibit in Germany. The paintings and drawings included here expand on Eisenman's well-established vocabulary of images, which often convey alternative ideas about social order and gender concerns. Taking her cues from Pre-Renaissance and Expressionist movements in art history, Eisenman's visual fantasies are expert in exposing the flaws of the modern life. The show also delves into the grotesque in the guise of satire and caricature.

In two large canvases, /Mining I/ and /Mining II,/ Eisenman's multi-figure paintings show mostly women, contoured nudes of orgiastic color loosely dispersed in a pre-industrial landscape, ostensibly mining beneath the surface of the earth for paint. The women survey the land, mill and prepare mixtures, and generally do the man's work - a common theme in Eisenman's work - and occasionally loll in the grass. Life flows gently and evenly in these paintings, and there is an observation of nature that recalls the post-Impressionist and Expressionist interest in the superiority of the primitive and utopian vs. urban decay. With Eisenman's work, that dichotomy is between an existing male reality and a proposed female alternative. In a third large canvas, "Big Fat Wave and Finding Pink" the ocean appears to overwhelm a solitary female figure walking along the shoreline populated by a lone lump of paint. As if seen from slightly above, the painting has a spiritual reverberation. In contrast to the paintings shown in Eisenman's exhibitions before, these works show a more sculptural quality.

Thematically, Eisenman returns to allegorical territory in two paintings entitled /Crushing Spirit Three By Three/ and /Ball and Chain/. Eisenman uses the canvas to depict familiar proverbial expressions such as "banging your head against the wall" and "ball and chain," and which relate to familiar Eisenman motifs about the art world and art school. These paintings, like 16th century Flemish proverb paintings, make sardonic reference to the often foolish culture they are witness to, thereby cautioning the viewer to consider their relationship to that culture.

In a series of mixed media portraits, Eisenman applies a cartoon-like style of flat-noses and square jaws to evoke the mood and personality of specific and imaginary heads, and to call attention to her role as the artist. In each painting, one portion of the canvas is covered with a bright yellow and black sticker the artist had mass-printed, based on the "How's My Driving?" bumper stickers that taunt motorists.

Eisenman's vivid imagination is evidenced in a group of highly detailed ink drawings, including /Hintertail Werkstatt /A natural extension of Eisenman's interest in the body, the drawings have a darkly comic quality that delves into both free-association and the comic grotesque. Misshapen imaginary creatures and distorted humans engage in surrealist encounters in street scenes and carnival-like atmospheres. In one sense, the images in the pictures seem carried over from the dream-state; in another sense, there is a mischievous disruption of order that is palpable, as Eisenman's universe tilts into an uninhibited, joyous food fight.
Elizabeth Saperstein