Kehinde Wiley, White. True to the show's title, each of the six large portraits featured in White, employs the artist's thesis by presenting figures on white ground with silver-white ornamentation, in white clothing - the only dark color is flesh. Sabeen Raja, New work. The artist marries the traditional technique of Eastern miniature painting with contemporary Western themes. 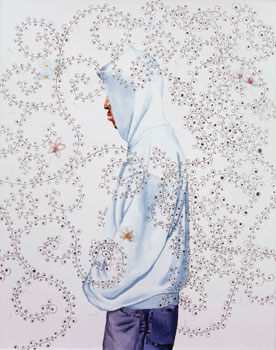 Conner Contemporary Art is pleased to present new paintings by Kehinde Wiley. Since receiving an MFA at Yale University in 2001, this 28 year old, New York based artist's meteoric rise has been punctuated by a string of successes. In addition to exhibiting at The Studio Museum of Harlem and in the 2003 Prague Biennial, Wiley's seminal Passing / Posing series was recently the subject of a solo exhibition at the Brooklyn Museum of Art (Brooklyn, New York) and is currently featured in Art in America (cover, April 2005). This is the artist's first exhibition in Washington, DC.

True to the show's title, each of the six large portraits featured in White, employs the artist's thesis by presenting figures on white ground with silver-white ornamentation, in white clothing - the only dark color is flesh. These portraits blur the boundaries between traditional and contemporary modes of representation. Rendered in a realistic mode -- while making references to specific old master paintings - Wiley creates a fusion of period styles, ranging from French rococo, Italian Renaissance and West African textile design to contemporary urban hip-hop. Wiley's slightly larger than life size figures are depicted in a heroic manner, as their poses connote power and spiritual awakening.

The artist's portraits are based on photographs of young men who Wiley sees as he walks around New York. Dressed in street clothes, they are asked to assume poses from old master paintings chosen from art history books. Wiley then accentuates the portrait with intricate historical designs referencing his embrace of the ornamentation in hip-hop culture.

The artist describes his approach as "interrogating the notion of the master painter, at once critical and complicit." Wiley's figurative paintings "quote historical sources and position young black men within that field of 'power. In this manner, Wiley's paintings fuse history and style in a unique and contemporary manner.

Sabeen Raja marries the traditional technique of Eastern miniature painting with contemporary Western themes. Often revolving around her wry observations of her Pakistani family and American society these small, jewel-like paintings (5 x 5 inches) are at once amazing and absurd. Raja is a recent graduate of The Maryland Institute Collage Art, Baltimore, Maryland (MICA) and has previously shown with the gallery in Academy 2003.