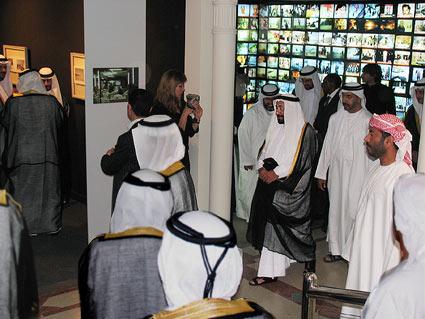 The Sharjah Biennial 7 addresses the rapid developments marking the region, but also raises the question of intersecting artistic traditions, and of partaking in "Globalisedâ€ art events. The Biennial is hosting over 70 artists and inviting biennial glitterati, local citizens and the vast expatriate community to consider the now vaporous landscapes of our professional, cultural and sociopolitical habitats.

The very choice of the theme "Belonging" raises the question of what it means to endorse internationalised art practices outside the established, traditional centers of the arts. To which point must the event transcend local prerogatives, and in which way can it uphold its specificity without looking helpless or folkloric?

This yearâ€™s Biennial will be held in the Sharjah Art Museum and in the Heritage Area which is currently being restored. The two spaces are at walking distance from each other, thus integrating the Biennial in the heart of the city and decentralising its scenography. The Sharjah Art Museum houses a permanent art collection which is embedded in a local traditional style of architecture. Integrating parts of the Biennial within it is an attempt to engage with the structural parameters underlying the event. The Heritage Area, meanwhile, is a network of small exhibition spaces, courtyards, alleyways and a souq. It mirrors a simple, unpretentious past, and the difficulties of reconstructing such a heritage within the fast-paced changes marking the Emirates today.

Participants and visitors will have to position themselves within a kaleidoscopic fabric of archaeological assets, modern and postmodern architecture, a booming consumer culture, long-standing traditions, unprecedented immigration and other interfaces - including the biennial itself. Working with this setting implies awkward questions of voyeurism and collaboration, tourism and respect. The now standard issues of alterity and glocalisation could be tested to their limits, beyond the comfortable frame of a customary biennial.

The Sharjah Biennial 7 has commissioned a large number of site-specific projects some of which will be performative interventions offering yet another opportunity to contextualise without being quaint, to explore and highlight, rather than play down, the limits between the privileged discourse of the artworld and the realm of the profane.

The Catalogue
Edited by painter and art researcher Kamal Boullata, the bilingual catalogue includes essays by a constellation of international curators, scholars, and art and cultural critics. In addressing the theme of the biennial, their contributions provide a multifaceted insight into questions that challenge our inherited assumptions about home, identity, and belonging. Like the works of artists participating in the biennial, each essay broadens our perspective, allowing us to see across cultural divisions and beyond regional differences.
Contributors: Frederick N. Bohrer, Nicolas Bourriaud, Boris Brollo, Laymert Garcia dos Santos, Jean Fisher, Elias Khoury, Joseph Massad, Khaled Mattawa, Gerardo Mosquera, Achille Bonito Oliva, Nadia Tazi