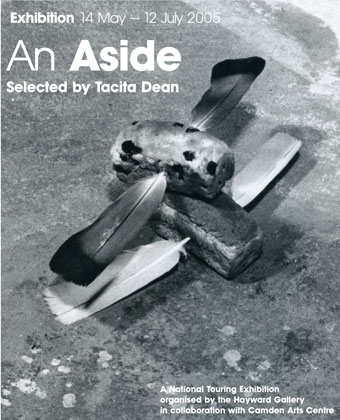 A National Touring Exhibition from the Hayward Gallery, London

For the exhibition, â€˜An Asideâ€™, the artistâ€™s selection of drawings, paintings, photography, sculpture and works on paper has been guided by a process of â€˜objective chance,â€™ a concept developed within the Surrealism Movement in the 1920s. This process of discovery informs Deanâ€™s own practice whereby chance encounters have led her to create formal and emotional connections between works and artists resulting in unexpected emerging links and themes.

Amongst works by 17 artists are the major painting Event on the Downs (1934), by the British Surrealist Paul Nash, rarely-seen painted stones by the German Dadaist Kurt Schwitters, an elegant silent film installation by Canadian Rodney Graham, and sculptures by German artists Thomas Scheibitz (German representative at this yearâ€™s Venice Biennale) and Thomas SchÃ¼tte whose work is specially made for An Aside.

Part of the Hayward Gallery Londonâ€™s National Touring Exhibitions Programme, the exhibitionâ€™s point of departure is a seminal slide projection with sound from 1968â€“76 by German artist Lothar Baumgarten entitled There I like it better than in Westphalia, El Dorado.

Baumgarten told a story that led Dean to look at early work by the German artist Gerhard Richter. Untitled (Self portrait),1971 was unobtainable for the exhibition but Studies for a Portrait Bust of Isa Genzken (7.12.1990), 1990 set Dean on her â€˜experimental journeyâ€™.

This led to Deanâ€™s inclusion of portrait heads and busts by the artists Joseph Beuys and Walther BrÃ¼x (Germany) and in turn to Arte Povera artist Marisa Merz (Italy) whose â€˜double headsâ€™ (Deux tÃªtes, 2002) Dean associated with the â€˜double self-portraitâ€™, Were 4, 2002 by American artist Roni Horn.

Subsequent encounters with French artists Raymond Hains and Yvan Salomone provided further leads for Dean to Marcel Duchamp, Jules Verne and beyond to the tale of optical illusions, Fata Morgana which Dean writes about in the accompanying artistâ€™s book.

She writes: â€˜I described it as a process of objective chance, but I have been more the dilettante than the devotee. My route has not been linear and obedient to the rules of that creed but has sprouted new shoots from various points along the way and gone off in diverse and conflicting directions, leaving me many paths to follow and some I refused to go down. I have shown no fidelity to the true unconscious process: some of my decisions have been associative, while others feel they have been very formally arrived atâ€™.

The exhibition takes its title from theatre vocabulary where an actor addresses the audience directly without any effect on the action on the stage.

Dean who is perhaps best known for her films that explore the passage of time, chance and coincidence, selected American artist Sharon Lockhartâ€™s film NO, (2003) which references landscape painting from a fixed perspective.

An Aside follows on from its successful presentation at Camden Arts Centre, London, and is the latest in the Hayward Galleryâ€™s series of projects selected by artists including Michael Craig-Martinâ€™s Drawing the Line, Richard Wentworthâ€™s Thinking Aloud and Susan Hillerâ€™s Dream Machines.

A series of screenings extends the exhibitionâ€™s context and is held from 14 May at Edinburghâ€™s Filmhouse. The programme features German director Werner Herzogâ€™s Fata Morgana (1971) a three-part experimental parable about life on earth, and French director Eric Rohmerâ€™s Le Rayon Vert (The Green Ray), (1986), an elegiac look at a quest for summer love.

An Aside is accompanied by an artistâ€™s book published by Hayward Gallery Publishing (RRP Â£12.95).

The exhibition continues to Tuesday 12 July at The Fruitmarket Gallery then tours to The Glynn Vivian Art Gallery, Swansea, from 1 October to 27 November, 2005.

The Fruitmarket Gallery is widely recognised as Scotlandâ€™s leading public art space. A registered charity, it is supported by the Scottish Arts Council.
SC005576.