Scape: a site-specific installation by Phyllida Barlow that incorporates 15 new sculptural works directly address the body. 'Body Memory': a documentary on the 'relational objects' of Lygia Clark, a rare video-work on her works in 1984. 'Describing Form': a moving image programme wih works by 9 artists which explores the way sculptures have been represented in artists' film. 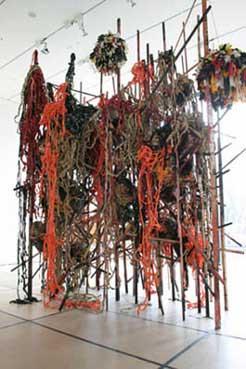 SCAPE is a site-specific installation at SPACEX by Phyllida Barlow, incorporating fifteen new sculptural works that will exist for the period of the exhibition only. The materials employed are basic and everyday; wood, cloth, cardboard, wool, household paint; and there is no attempt to disguise their rudimentary function in the construction of the completed works. The emphasis is upon structure and form in space.

The installation is constructed around two project spaces at SPACEX; one a large light-filled hall with three tall windows, the other an enclosed â€˜white cubeâ€™ without any natural light. Thus the installation is divided into two parts, light and dark, open and enclosed spaces.

The physical presence of Phyllida Barlowâ€™s art-work directly address the body. Sometimes these â€˜relational objectsâ€™ suggest architectural associations, such as staircases, platforms, walls or barriers. At other times, references to the work of favourite artists, such as Louise Bourgeois or Eva Hesse, seem apparent. There is an emphasis upon colour, and references to painterly abstraction. However there is also a continual narrative in relation to the human body, both in terms of the visual form of the sculpture and the sheer mass and volume of the work in relation to the body of the viewer.

At the same time, these sculptures seem to attempt to exist as â€˜autonomousâ€™ art objects, â€˜things-in-themselvesâ€™, at home in the space of art, in defiance of the prevailing model of the â€˜artwork-as-textâ€™ that exists only in the matrix of critical discourse and as a referent to a wider social context. Thus the work appears to embody a contradiction, existing as it does somewhere between the autonomous and the associative.

Phyllida Barlow was born in Newcastle upon Tyne in 1944. She lives and works in London and is Professor or Fine Art at the Slade School, University of London. In 2005 she has had one-person exhibitions at BALTIC, Gateshead, and Bloomberg SPACE, London. Her work is presented courtesy of Program, London.

A monograph, Objects forâ€¦ and other things, was published in 2004 by Black Dog Publishing and is available from the bookshop

Describing Form is a new moving image touring programme from LUX which explores the way sculptures have been represented in artists' film.

"How to represent the weight and space of sculptural form on film? How to describe in moving images what is fundamentally still? It could be said that sculpture is described by the space around it, by the experience of perambulation, or touch. The moving image positions the viewer at one remove from this direct experience. The sense of material and surface and environment that is so immediate during a first hand encounter with a sculptural form becomes framed through the lens of the filmmaker, a document caught in another time and space. It is in the tension between these two states that avant-garde filmmakers, and the artists themselves, have brought their singular and experimental approaches to filming form. Artists as varied as Maya Deren and Richard Serra have explored structures of sound, performance and even humour to go beyond mere documentation, and present new ways of using the moving image to offer fresh perspectives on sculptural form."
Lucy Reynolds, curator

Marie Menken
Visual Variations on Noguchi
1945 5mins
When the sculptor Noguchi asked the artist Marie Menken to look after his New York studio in his absence, she took the opportunity to record her responses to his sculpture, producing this powerful interweaving of sound with abstracted image.

Hy Hirsh
Gyromorphosis
1954 7mins
Hirsh puts into motion the inherent kinetic qualities of the construction-sculpture of Constant Nieuwenhuys of Amsterdam. 'To realize this aim I have put into motion, one by one, pieces of this sculpture and, with colored lighting, filmed them in various detail, overlaying the images on the film as they appear and disappear. In this way I have hoped to produce sensations of acceleration and suspension which are suggested to me by the sculpture itself.' Hy Hirsh

Liliane Lijn
What is the Sound of One Hand Clapping
1973 14mins
'The title is taken from a Japanese koan, which is a Zen meditation problem.
The film concentrates on a series of conical sculptures which were objects for mediation or how to empty the mind. I related this problem to the spacial problem of how to dematerialise a volume into vibration.' Liliane Lijn.

Maya Deren
Witch's Cradle Outtakes
1943 10mins
All that exists of a film Deren made of an environment based on Duchamp's string sculpture at the New York Surrealist Exhibition in 1942. These outtakes hint at a complex exploration by the artist of the relationship between Duchamp1s sculpture and symbols of witchcraft. The enigmatic images incorporate a female figure and Duchamp himself.

Dudley Shaw Ashton
Figures in a Landscape
1954, UK, 16mm, 18mins
An unusual documentary portrait of sculptor Barbara Hepworth, relating her sculptures directly to the natural forms of the land by positioning them within the Cornish landscape.

Richard Serra
Hand Catching Lead
1968, USA, 16mm, 3.30mins
A playful examination of the relationship of the artist to his materials. The hand of sculptor Richard Serra is filmed as he attempts to catch, and often misses falling lumps of lead. Whilst the forceful trajectory of the falling lead echoes the movement of the film frames, it also exposes the futility of the artistic process.

Hannah Wilke
Through The Large Glass
1974, USA, video, 10mins
Performance artist Hannah Wilke challenges the authority of sculpture in the museum, performing a striptease behind Marcel Duchamp's Large Glass at the Philadelphia Museum of Art.

William Raban
Waterfall
1983, UK, 16mm, 8mins
A rarely seen film of Ron Hasleden's sculptural installation Graveing Dock at the Acme Gallery. Raban experiments with the acoustics of dripping water, an integral element of the sculpture, in relationship to the spaces within and around the structure.
Daria Martin, Birds, 2001, USA, 16mm, 6mins

Daria Martin
Birds
2001, USA, 16mm, 6mins
The opposite of an overbudgeted Hollywood blockbuster, Birds is a kind of magic act that shows how the trick is done. Birds mines pre-digital tools to create low-tech special effects for today1s world, using archaic film tricks, the contrived staginess of theater, the old-fashioned pleasures of the "plastic arts" -color, form, and the transformative thrill of fashion to create a completely different kind of "virtual reality." Fantasy is made tangible, as the viewer's awareness vacillates between the magic of the materials transformation, and that transformation's failure. DM.

A documentary on the 'relational objects' of Lygia Clark (Brazil), directed by Mario Carneiro in Rio de Janeiro, 1984. This rare video-work has been kindly lent by Guy Brett.

After Clark's prominent participation in the neoconcrete movement, in the company of her friend HÃ©lio Oiticica, she went on to create ephemeral objects to be held in one's hands. Her relational objects from the early sixties were conceived as "living organisms" which take on form and meaning through their contact with the body of the spectator. Withdrawn from all possible financial speculation, they are fabricated from cheap, renewable materials. She then realized the "MÃ¡scaras sensoriais" (1967), which demand an increasingly intense sensorial and psychic investment from the spectator.

The basic attitude in Clark's work is anti-mechanical and biological. In the 1970s, she became increasingly interested in the therapeutic possibilities of art. Her later interactive works contain elements of Happening and Performance, but are more of an attempt to move along the fine line between temporally- and spacially-fixed art on the one hand, and psychotherapy on the other. From 1978 on, she dedicated herself solely to her practice as psychoanalyst.

At the age of 27, she studied with the landscape-architect Roberto Burle Marx in Rio de Janeiro; 1950-52 with Arpad SzÃ¨nes and Fernand LÃ©ger in Paris. 1952 exhibition of abstract painting in the MinistÃ©rio da EducaÃ§ao e Cultura in Rio de Janeiro; 1953 participation in the Biennial of SÃ£o Paulo. 1964 participant in the "Grupo Frente", from which the Concretism movement in Rio de Janeiro emerged. 1954-58 series of paintings which are concerned with Constructivist parameters. 1955 and 1957 participation in the Biennial of SÃ£o Paulo and 1957 in the I ExposiÃ§ao Nacional de Arte Concreto in Rio de Janeiro; 1959 signer of the Neo-Concretism Manifest. After 1959, use of objects in which the observer is actively integrated, especially after 1965 with Happenings and Performances. 1970-75 position as instructor at the Sorbonne in Paris.