Pyramids rise, Spheres turn and Cubes stand still. Geometric forms have fascinated the artist since the beginning of his career and the exhibition comprises over 15 unseen sculptures and a selection of complimentary drawings. The centrepiece is a Pyramid, Sphere, Cube sculpture, which has been charred, transforming the colour and texture of the wood to the richness of charcoal. 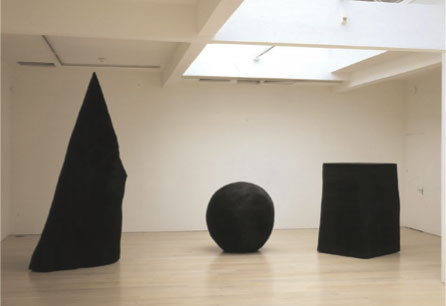 â€œDavid Nashâ€™s sculpture has reached a rewarding maturity. And as well as testifying to the shaping power of his imagination, it reflects his ever deepening rapport with the landscape he loves. â€- Richard Cork 2004

David Nash is one of Britainâ€™s leading sculptors and is renowned for his skilful and dynamic transformation of fallen or uprooted trees. Annely Juda Fine Art is delighted to present a new exhibition of his sculptures and drawings based on the theme of the Pyramid, Sphere and Cube.

Geometric forms have fascinated Nash since the beginning of his career and the exhibition comprises over 15 new and unseen sculptures and a selection of complimentary drawings. The centrepiece is an impressive Pyramid, Sphere, Cube sculpture (above) almost three meters tall, which, like many of Nashâ€™s works, has been charred, transforming the colour and texture of the wood to the intense richness of charcoal.

For the past 25 years Nash has also been working on an extraordinary project motivated by his interest in ecology and the environment. In 1978 he rolled a large wooden sphere into a river near his studio in Blaenau Ffestiniog, North Wales. Since then he has documented the boulderâ€™s journey and changing environment until it reached the sea in 2004. Included in this exhibition is Nashâ€™s compelling video and documentation of this living project â€˜Wooden Boulderâ€™.

Alongside these works are other large-scale sculptures and some smaller more intimate interpretations of the theme including wall panels, free standing columns and a selection of shelf sculptures.