Time Landscape: Reflection (1965-1978-Present). The 40th anniversary exhibition of Sonfist's Time Landscape, located in the heart of New York City's Greenwich Village. The exhibition will include original artwork and documentation of the historical Time Landscape from 1965 as well as a new series of mixed media works updating the sculpture as a contemporary work of art. 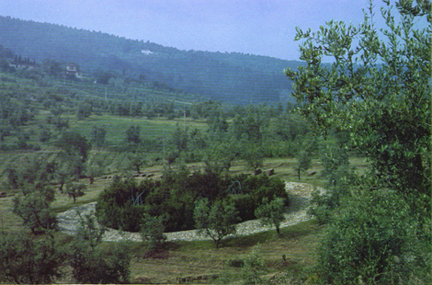 Paul Rodgers/9W is pleased to present the 40th anniversary exhibition of Alan Sonfistâ€™s Time Landscape, located at the intersection of Houston and LaGuardia Place in the heart of New York Cityâ€™s Greenwich Village. Time Landscape was proposed to the city by the artist in 1965, physically completed under Mayor Ed Koch in 1978, and land marked by Parks Commissioner Henry Stern under Mayor Rudi Giuliani in 1998. The exhibition will include original artwork and documentation of the historical Time Landscape from 1965 as well as a new series of mixed media works updating the sculpture as a contemporary work of art.

The Time Landscape is a replanted, pre-colonial forest in the heart of the modern metropolis that reveals the physical environment of Manhattan before the city was built. Sonfist has stated that the South Bronx neighborhood where he grew up still contained an unspoiled primal forest in which he played daily as a child before it was finally burnt down and paved over with concrete. The sense of loss inspired by the passing of this forest has motivated the artistâ€™s life-long concern with bringing nature back into the city. Sonfist is one of the conceptual instigators of the immensely influential Earth/Land Art movement of the 1960â€™s. Valerie Smith has stated in this springâ€™s Queens Museum exhibition â€œDown the Garden Path: Artistsâ€™ Gardens since 1960â€, that Time Landscape is â€œthe first urban Earthwork of its generationâ€. As such, Time Landscape can be fairly credited with providing a model for contemporary urban environmental art and landscape architecture.

Working in the shadow of increasing urgency and concern for the environmental and ecological future of the planet, Alan Sonfist is a rare visionary. Sonfistâ€™s message is essentially one of hope. He has stated that there are alternatives that we can follow in the face of cyclical climate transition which has been aggravated by human intervention. From his long experience as an early advocate for the environment, Sonfist has learnt that key in the struggle to get public awareness and support for an environmental program is the capacity to visibly demonstrate these alternatives. Time Landscape was originally conceived as the first of fifty such sites which would spread across the face of New York. Just as Frederick Law Olmsted's Central Park gave life to New York City when it was built in the mid-19th century, Sonfist's vision of fifty Time Landscapes stretching across the metropolitan area is an inspiration at the beginning of the twenty first century. Fulfillment of that project is a challenge that we should undertake today.

During the 1970's, Sonfist realized a number of site specific commissions across the United States which culminated in two retrospectives at the Boston Museum of Fine Art and the National Collection of Fine Art, Washington DC. More recently, Sonfist has concentrated on numerous international commissions that have come to him from Europe. This summer he will inaugurate the Lost Falcon of Westphalia on Prince Richardâ€™s estate near Cologne. Alan Sonfist's work is in numerous international public and private collections including the Ludwig Collection in Germany, the Georges Pompidou Center in Paris, France, the Art Institute of Chicago, the Museum of Modern Art San Francisco, the Los Angeles County Museum of Art and in New York City at the Whitney, the Museum of Modern Art and the Metropolitan Museum of Art.

The exhibition will be accompanied by a definitive three hundred page biography and survey of Alan Sonfist's career thus far, published by the Gori Foundation, Florence, Italy and distributed in this country by DAP. The text includes full color illustrations and introductions by Robert Rosenblum and Wolfgang Becker.