Open Systems: Rethinking Art c.1970 brings together the work of 31 international artists who radically rethought the object of art in the late 1960s and 1970s. The featured artists sought to connect with the increasingly urgent political developments of the decade and make their work more responsive to the world around them. They reacted against art's traditional focus on the object by adopting experimental aesthetic 'systems' across a variety of media. Herzog & de Meuron: the exhibition offers a unique insight into the creative processes of one of the world's leading architectural practices. The exhibition spans 25 years of work from early residential projects to recent large-scale international commissions 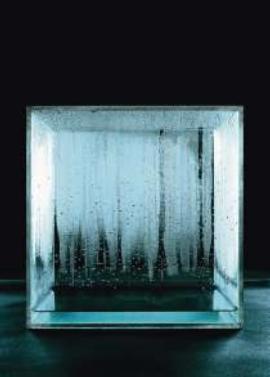 Open Systems: Rethinking Art c1970 brings together the work of over twenty-five artists from Britain, Central and Eastern Europe, South America, and the United States to examine how artists rethought the art object in the 1960s and early 1970s. Moving away from the aesthetic concerns of Minimalism, the late-Sixties saw a radical departure from art's traditional focus on the object, to wide-ranging experiments with media that included installation, photography, performance, film and video.

With the emergence of computers and binary code theory, 'systems' and the concept of organised knowledge were becoming commonplace in the 1960s. Reacting to the growing social and political upheaval of the time, artists began to view systems with distrust and created art which questioned the contemporary belief that the world would be a better place if ordered. One characteristic of the artists who emerged in this period is their adoption of experimental aesthetic 'systems' to generate their work. Gordon Matta-Clark's collaborative work, Anarchitecture, which has not been seen since its creation in 1974, systematically presents seventy photographs and sketches of the arbitrary and incidental aspects of the urban landscape.

The exhibition begins by considering the shift from Minimalist structures to more textured forms that directly reference the organic and material world. The breaking down and opening out of the Minimalist cube will be revealed in works including Hans Haacke's Condensation Cube 1963-65 in which droplets of water form condensation according to the environment in which it is presented. Robert Smithson's floor sculpture Vortex 1967 entices the viewer to look within the fragmented mirrored structure to see themselves and the world around them reflected.

Connecting with the increasingly unsettling political developments of the decade, reflected in the Paris riots in 1968 and the political assassinations of Martin Luther King and Robert Kennedy, artists began to make their work more responsive to the world around them.
In Hans Haacke's controversial exposÃ© of property ownership in New York, Shapolsky et al. Manhattan Real Estate Holdings, a Real Time Social Systems as of May 1, 1971, the artist suggests the potentially corrupt ownership and allocation of public housing in New York.
Helio Oiticica's Projeto Filtro â€“ Para Vergara New York 1972, consists of a large maze-like structure of exotic colours and textures, that challenges the pure space of modernism while referencing the slum clearance of Rio.

The exhibition is curated by Donna De Salvo, Associate Director for Programs at the Whitney Museum of American Art, New York and previously Senior Curator at Tate Modern, assisted by Victoria Walsh. The exhibition is accompanied by a fully illustrated catalogue.

An Exhibition by Schaulager Basel and Herzog & de Meuron


To coincide with the fifth anniversary of the opening of Tate Modern, Tate will present Herzog & de Meuron. An Exhibition. The exhibition offers a unique insight into the creative processes of one of the world's leading architectural practices. Herzog & de Meuron won the international competition to select an architect for Tate Modern on 24 January 1995 and has recently been appointed to develop a further scheme for completion of the gallery and its surrounding area.

The exhibition, which is the first major architecture show to be presented by Tate, spans twenty-five years of work from early residential projects to recent large-scale international commissions, including Tate Modern. Arranged over forty 'island' tables of various sizes in Tate Modern's Turbine Hall, more than seventy projects will be represented by objects from the Herzog & de Meuron archive that reveal the diverse, creative paths of development which lead to the realisation of these projects. Made from a wide variety of materials, the objects range from sketches, early maquettes outlining ideas and material samples to models and mock-ups as well as photographs and film footage of finished projects. These items tell the story of how ideas take shape and form through a complex process of experimentation and detour to evolve a new architectural language for building. They will spread out as if in a market square, reminding us of the architects' original concept of the Turbine Hall as a public street.

Herzog & de Meuron was founded in Basel in 1980 by Jacques Herzog and
Pierre de Meuron and, since then, it has completed many landmark projects. The practice now has additional offices in London, Munich, Barcelona, San Francisco and Beijing. It has received international acclaim for its innovative work including, in 2001, The Pritzker Prize and, in 2003, the prestigious RIBA Stirling Prize for The Laban Dance Centre, London.

Projects featured in the exhibition will include the Dominus Winery, Napa Valley, California 1998, Schaulager for the Laurenz Foundation in Basel in 2003, Prada's flagship store in Aoyama, Tokyo 2003, the library of Eberswalde University, Germany 1999, Forum Barcelona 2004, the expansion of the Walker Art Center in Minneapolis 2005 and ongoing projects such as the de Young Museum, San Francisco opening in 2005, the Allianz Arena, the new Soccer Stadium for Munich (to be completed in May 2005, opening game FIFA World Cup 2006), The National Stadium for the 2008 Olympic Games in Beijing and The Philharmonic Hall, Hamburg, which will be completed in 2009.

An Exhibition Sponsored by Swiss Re Supported by Pro Helvetia, Arts Council of Switzerland