Hand in hand we walk alone 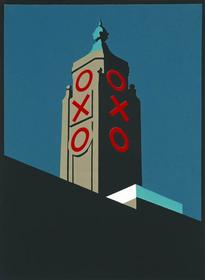 Clapham Art Gallery is delighted to present 'Hand in hand we walk alone', in association with Art Fortnight London and 'Young Masters'.

The genesis of this show arrived with the inclusion of three artists associated with Clapham Art Gallery in June's 'Young Masters' at 148A St John Street, Clerkenwell. Curated by Flora Fairbairn and Catriona Warren, 'Young Masters' features a selection of highly rated contemporary artists who are influenced in various ways by Old Master painting.

Clapham Art Gallery invited these three artists, Tom Hackney, David Hancock and Claire Pestaille, to co-curate a simultaneous show with Zavier Ellis. Between them they have derived an outstanding list of thirteen young, internationally exhibiting artists, all of whom will show work that has been inspired by Old Masters to some degree.

Hannah Conroy questions authorship and originality in her appropriations. By making subtle interventions on postcards of Old Master paintings, Conroy employs visual puns to undermine the images' usual sobriety. Alexander Roslin's 'Woman in a Mantilla' grows an unsightly sore on her lip and Giorgione's reclining Venus sunburns as she lies naked in the landscape. Conroy then goes on to challenge traditional notions of how work should be exhibited as she mails her postcards directly to the curator or gallery in question. Conroy therefore relinquishes all control over her work as soon as it is completed.

Sam Dargan creates small scale paintings that express the alienation and frustration experienced in contemporary daily life. Isolated middle income men are depicted in stark environments with political graffiti often forming the backdrop. Dargan's work is packed with hostility, commenting on the imbalance of power systems and the futile existence of the individual. Dargan's work often responds to cinematic imagery and 20th Century literature, and more recently to the melancholy and underlying savagery of the Mannerist era.

Tom Hackney has turned his impeccable photo-realism toward the awe inspiring romanticism of Casper David Friedrich. Working at the same canvas size as Friedrich, Hackney has used found or original photographic sources that correspond to specific paintings. Each piece undergoes a series of filtering procedures as Hackney constructs the final translation.

David Hancock has created a series of intimate paintings inspired by the Pre-Raphaelites. The 'Charlotte Sometimes' series is an attempt to recreate the lost works of Hancock's ancestor, a mid-Victorian Artist. Hancock has carefully pieced together the works from descriptions within a bizarre correspondence between the artist and his muse - this being the sole remnants of his ancestor's legacy.

Sigrid Holmwood is well known for her vibrant painting style. Based largely on elements of Renaissance paintings by the likes of El Greco, Titian and Giorgione, Holmwood makes distinctive tree paintings in bright hues. Her subjects are often windswept and solitary looking, appearing as islands, on hills or on the edge of some land mass. Holmwood's trees are creature-like, strangely compelling and menacing even.

James Jessop has been transcribing elements from Old Master paintings since 1996. Most known for his recent spoof horror/monster paintings as shown by Saatchi in 'New Blood', Jessop's work emanates a raw punk energy. Informed largely by graffiti and sub-cultural movements generally, Jessop articulately merges his sources. In particular, Jessop is drawn to the compositional vibrancy of Rubens, where he seeks to employ the energy, rhythm and movement found in the Baroque master's works.

Kristina O'Donnell's miniature paintings and drawings demonstrate a genuinely historical sentiment. Technically outstanding renditions of figures, faces and objects are concealed behind thick layers of varnish that enclose the subject. As viewers we are enticed into a close inspection of the work whilst the image simultaneously recedes and therefore prevents us from achieving our desired intimacy. O'Donnell's works are concurrently timeless and time-bound.

Tim Parr also makes beautifully rendered miniature paintings and is inspired in particular by the period in 17th century Holland that saw scientific developments in optics that lead directly to the wider use of microscopes and telescopes. Contemporary accounts described the wonderment experienced by a strange new world where parasites were transformed into grotesque monsters and grains of sand into huge boulders. Parr clearly revels in this wonderment as tiny fantastical figures inhabit the natural world; the everyday becomes dislocated and the familiar strange.

Claire Pestaille explores hidden narratives of paintings from the past, disrupting traditional, conservative and conventional portraiture. By extending the narrative of the original through subtle interventions Pestaille aims to draw out hidden meanings, dualities and absurdities within a subversive vision. Pestaille's unique vision combines beauty and horror in equal measure as she interweaves a dialogue between past and present, producing characters that could have existed in fairy tales and legends alongside hybrids of horror movies and surrealist symbolism.

Hannah Plumb is known for her sculptures that recall Old Master genres. Plumb is particularly concerned with animism, that is the human tendency to project life onto inanimate objects. To this end she casts from sex dolls, thus creating a distinctive dialogue between the baseness of low end sex toys and the elevated aesthetic of busts and reclining nudes from the High Renaissance and Classical periods. Recalling the Venus de Milo, Plumb's most recent piece is a limbless and headless torso which is intended to focus the viewer on the purity of the female form.

Jo Whittle borrows from various sources throughout art history and combines these elements with places and landscapes that she has herself experienced. Whittle's landscapes are sombre and barren, being inhabited by leafless trees and stark rock formations. The raw, potentially desolate nature of the landscape is emphasized, but is punctuated by the evidence of man and his pursuit to overpower nature, as illustrated by traffic cones echoing tree stumps, a distant crane corresponding to a naked tree, or the sterile ground lying partly paved.

Hannah Wooll paints strange hybrid creatures on a large scale; her characters are displaying themselves, wanting to be looked at. Striking poses inspired by Spanish masters such as Goya and Velasquez, these figures are temptresses derived from Wooll's own doll sized models. There is something desperate, however, about these poor creatures that are forlorn and unaware of their physical distortions. Their beautiful faces stare wantonly from beneath outsized bows, attached to malformed, dysfunctional bodies.

Vicky Wright pursues the sentiment of the Old Master in her bizarre hybridised paintings. By responding to an Albert Cuyp landscape or a Gainsborough sky, Wright subtly interweaves these influences with her improvised fantastical forms. Wright's forlorn creatures represent a personal mythology that is strangely poignant and deeply seductive.