Jersey City Paintings: compelling essays in the neo-Expressionism that defined cutting-edge art in the early eighties. Yet in their acute sense of mutability and decay, in their intimate knowledge of the poetry of transience, they adumbrate a consciousness that increasingly shapes our shared culture: the deracinated and transplanted nostalgia of the emigre'. 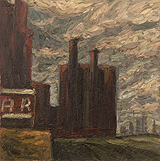 In one sense, Katya Arnold's Jersey City paintings are very much of their era: compelling essays in the neo-Expressionism that defined cutting-edge art in the early eighties. Yet in their acute sense of mutability and decay, in their intimate knowledge of the poetry of transience, they adumbrate a consciousness that increasingly shapes our shared culture: the deracinated and transplanted nostalgia of the Ã©migrÃ©.

Russia, where Arnold began painting at the age of 14, is not just a country with a very idiosyncratic culture vacillating between East and West. Russia is a civilization on its own gigantic scale.

This is why it is so hard for an artist to extricate him- or herself from the Russian milieu: it requires not just a crossing of the border but a breakaway from an entire mode of thinking. To feel free, Arnold had also to break away from her highly placed and well established family (her brother, Dmitri Arnold, is a Nobel Prize laureate in mathematics); from her Soviet art school training; and, too, from the intellectual tradition to which she felt she was linked with through her mentor, the metaphysical painter Vladimir Weisberg, whose lifelong ambition in art was to entrap light by breaking up the spectrum of white colour in images of white objects set against a white background.

Katya Arnold endured several types of exile. First, from a young age she was at odds with the country of her birth, becoming what the Russians termed an â€˜inner Ã©migrÃ©â€™: she moved in dissident circles, was frequently in trouble with the authorities and eventually took part in the historic act of collective rebellion known as the 'bulldozer' exhibition: a privately-organised open-air show that the KGB smashed with bulldozers and which consequently became a cause celebre for the world press (1974). Second, she got married to an arch enemy of Weisberg's school of art - the creator of a parodist pop-art version of Socialist Realism called sotsart, Alex Melamid. The third exile came with emigration from Russia (1977) - first to Israel, then to the United States. It was a difficult time for her and her family, a time of hardship and the time of parting from the Russian past. No wonder that when Arnold decided to bury this past in Jerusalem once and for all, using the medium of a performance (1979), she resorted to a device known to every Russian child: you create a sekretik - a little secret - by digging a hole in the ground, hiding your precious mementos there inside and covering the cavity with a glass so you can see the buried "past" like a colourful treasure under a transparent glass screen. It was an ambiguous act: a farewell to the beginning of her career, and to the familiar methods of Moscow Conceptualism; but also (everything was meticulously sealed) a means of preserving her oeuvre at a time of great uncertainty. In 1980 Arnold moved to the United States.

Arnold's corner of the New World was Jersey City, historically a manufacturing and transportation hub. The grey, graphic palette of her brutal, grim, romantic and lyrical depictions of the city was a direct violation of Wesiberg's metaphysical principles of pure art, of "white on white". It was for her an attempt to discover a new continent, a new beauty and, in essence, a new sense of self out of the ostensible ugliness and garbage of slums - a romantic acceptance of new reality regardless of its moral or aesthetic evaluation by outsiders. In her own words, these paintings are about her â€™love-hate relationship with America and desire to find a â€œrealâ€, not sterile or artificial, world.â€™ Jersey City, Arnold says, â€˜happened to be dark, ugly and romantic at the same timeâ€™. In the unrenovated urban landscape she became conscious of the accumulated history of this conurbation of 250,000 inhabitants. She had no roots here, yet now she was hankering after a vanishing New Jersey past that symbolised in her mind a more innocent America. Perhaps a sense of loss was being transferred, from one dilapidated cityscape to another. The post-war urban working-class milieu that she memorialises in these canvases was, in her phrase, â€˜the era of jazz, drinking, smoking and simple socializingâ€™ : maybe not too remote from the bohemian Moscow of the Brezhnev years that she had left behind (the critic Ekaterina Dyogot has written of the â€˜current of love, friendship and endless free timeâ€™ that existed in the USSR in the years pre-perestroika). Katya Arnold and Alex Melamid have also become great connoisseurs of the rich culture of a variety of ethnic restaurants in different ghettoes of Jersey City and its environs. If you happen to move there, don't fail to contact them (they both live in Manhattan now) - they will be the best guides to your new life in the slums on the other side of Hudson River.