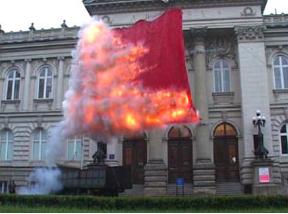 The Zacheta National Gallery of Art presents the first in Poland and in post-communists countries solo exhibition of New York-based Chinese artist, Cai Guo-Qiang. Cai Guo-Qiang is one of the most outstanding of todayâ€™s contemporary artists. He was born in 1957 in Quanzhou in China, and studied in Shanghai. From 1986 he worked in Japan, and from 1995 has been living and working in New York. His work links the language of contemporary art and elements of western culture with symbolic objects that make reference to the material culture of China: such as medicine, feng shui, gunpowder and kites. Although Cai works in a variety of media, his artistic calling-card is gunpowder, used in public firework displays which confront its military context with a more positive fate, expressed symbolically through the modern language of action art and performance. This activity, initially carried out on a minimal scale, has been transformed into experiments that have taken on the character of explosions and impressive fireworks displays. Caiâ€™s pyrotechnic projects are dependent on the place they occur in and its history: they take on very different forms, from short actions using gunpowder for example extending the line of the Great Wall of China by 10,000 m by extending a long fuse (1993) or making a miniature explosion â€œin the handâ€ giving the effect of a symbolic mushroom cloud (New York, 1996) to the monumental pyrotechnic displays for MoMA (2002), Central Park (2003) or on the occasion of the APEC meeting in Shanghai (2001). Cai Guo-Qiang is also known for his unique installations in which he has made use of kites, a real jacuzzi with people bathing, a golf course, old boats, bamboos and roller-coasters. The artist has also created feng shui projects in public space in Japan and New York.

For the Zacheta National Gallery of Art Cai Guo-Qiang has prepared a project composed of several elements which relate to communist times in Poland and in the world at large: the experience of these times is a similar one both for us and for artist from China. On the day of the exhibition opening, a pyrotechnic event took place: the explosion of a monumental (6.4 x 9.6 m) Red Flag on the square in front of Zacheta. This symbolises an act of brutal revolution, but also a liberation from the totalitarian system. At the exhibition is also shown drawing of the flag made in a unique way: through little explosions of gunpowder on paper. The main installation, Paradise, composed, amongst others, of kites, kept airborne by a fan, showing photographs of people and situations linked with communism, and also cradles rocked by little engines, with flags of former and current communist countries attached. The installation is composed of many modest and infantile elements associated with the sphere of childhood. The exhibition might seem to suggest that the worst in history is safely behind us, that the demons of the past have gone to their eternal rest in cradles/coffins or have flown into anonymity on kites.

The exhibition is accompanied by a unique catalogue in a format of a file of about 130 pages with essays by philosopher Jean-Luc Nancy and curator Maria Brewinska.

In the spectacular video-installations of David Zink Yi, two aspects of time are extracted: one is contained in the rhythms in which emerges the temporal organisation of music, the second in the cultural processes which become concrete in individual experiences. In the video-installation La Cumbia, on a chequer of small squares painted onto a green body, two fingers imitate a dance to the rhythm of the Columbian melody referred to in the title. The â€œalienâ€ body is treated as an instrument, a medium searching for a cultural identity whose expression is musical traditions.

In the installation assembled from ceramic elements (Untitled, 2000-2003), depicting in a realistic way the tentacle of a huge octopus, David Zink Yi also refers to a series of themes that are close to him. Motives from the world of science (biology) transferred into the sphere of culture refer to the idea of the domesticating of the â€œalienâ€ and the mythological narration of history. In the ancient times of maritime ventures, when it was thought that the earth was flat, there was a legend according to which at the edge of the world lived giant octopuses, who would seize hold of and swallow up ships. The use of this â€œnobleâ€ material in David Zink Yiâ€™s work creates an ambivalent effect through the â€œdomesticationâ€ of a mythical creature and the need to come to terms with fear. Approaching the sculpture, spectators are obliged to find themselves within the grip of the octopusâ€™ tentacles, like a foreign body undergoing a continual process of assimilation.