'Voiceless' is the story of the aged, the lonely, the homeless. Individuals who are members of socially marginalized groups get the chance to tell us about themselves, lead us along the paths of their lives, talk us through their feelings and values. Their stories are barely audible and you must stop and focus for a few moments to hear what they have to say. 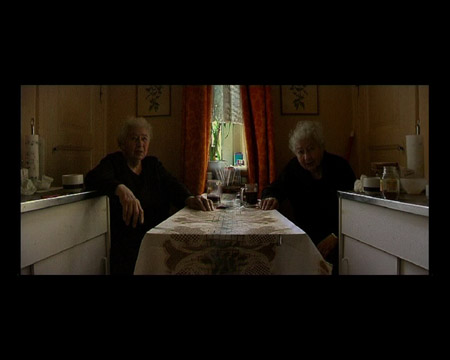 Voiceless is the title under which Anna Konik shows two new projects: Transparency and In the Middle of the Way. Both these works seem to contradict the title as in them the artist grants those who do not usually have a voice an opportunity to speak. Voiceless is the story of â€œothersâ€ â€“ the aged, the lonely, the homeless. In its two component pieces, individuals who are members of socially marginalized groups get the chance to tell us about themselves, lead us along the paths of their lives, talk us through their feelings and values. Their stories are barely audible and you must stop and focus for a few moments to hear what they have to say. These encounters could hardly have been easy for the artist. Her subjects might seem comic or grotesque to others, yet she treats them with the utmost seriousness and respect, and it is her far-reaching openness, I believe, that renders her capable of this. A silent and impartial listener, she gives them the chance to tell their touching and often wise stories.

Transparency features Mija of Berlin, Mr. Thaddeus of Warsaw and Madame Wichmann and Mr. Brozy of Stuttgart â€“ a quartet of people who are advanced in their years and very lonely. They tell seemingly commonplace life stories of unfulfilled dreams, love, devotion and solitude, but the artist presents these stories told by people aware of their own imminent end in an unusual manner. Anna Konikâ€™s subjects have been filmed so as to be â€œtransparentâ€ â€“ in their homes, sitting at tables and looking directly into the camera; their images have been doubled and their statements, at first glance merely reluctant confessions made to the artist, become original, new narratives. For Konik has filmed each of her subjects twice â€“ each time in the same space and recounting what seems to be the same life story. Their dual images juxtaposed, her subjects seem to listen as much as they speak, sometimes agreeing and at other times disagreeing with themselves. Entering the installation, you encounter a life-size figure (Mija sitting at her table or pushing her shopping cart, or Mr. Brozy in his wheelchair) and â€“ willing or not â€“ witness an intimate confession that is at once a monologue, a strange dialogue and the conversation of someone with their own mirror image. The artistâ€™s singular form of presentation is emphasized through the â€œoddityâ€ of her subjects, whose behavior hardly fits our idea of â€œnormalâ€ life, reality.

Ania Konnk has an amazing sense of people, she knows how to listen to them and make them feel comfortable. Only these abilities can explain why her collaborators seem to trust her. Without ever posing or being theatrical, they speak of their defeats and unfulfilled ambitions, of love, solitude and the houses they never built...
Ika Sienkiewicz-Nowacka

Anna Konikâ€™s In the Middle of the Way spans both time and space. The artist made its first part in April 2001 in Warsaw, the second in October 2002 in Berlin, the third in March 2005 in Moscow, and its last installment â€“ focusing on herself â€“ at the turn of April and May 2005 in Berlin, Warsaw and in Dobrodzien, the small town in southern Poland that is the artistâ€™s hometown. The artist aims to add installments made in other European cities and perhaps even on other continents in the future.

In the Middle of the Way is a kind of performance that plays out between the artist and the project participants â€“ though this performance has no audience, no witnesses. It is also a kind of filmed essay on â€œhomelessness.â€ Anna Konik spends a single day with randomly encountered individuals, asking them to tell their stories, show her the places that are important to them. Thus, we learn about these people and the cities they inhabit. In the fourth and final film the artist talks about herself, the places that played an important part in her life, her incessant traveling â€“ her being â€œon the road.â€
In her works, Anna Konik shows us people who live at the fringes of society, people we pass on the street every day without noticing. With In the Middle of the Way, the artist focuses on the homeless. Her subjects show themselves to be living in constant motion, to be incessantly on the road. They belong to no specific place and have no home, and thus are simultaneously free as they can make their home anywhere. Anna Konikâ€™s protagonists live more of their lives in their own inner worlds than in the reality that surrounds them. They have found homes for themselves within themselves.

In its current form, Anna Konikâ€™s In the Middle of the Way links three capitals â€“ Berlin, Warsaw and Moscow â€“ and the small town of Dobrodzien. We discover all these places through various stories of â€œhomelessness.â€ The artist demonstrates that something links these cities which are otherwise so different from each other: that something is people like Thaddeus of Warsaw, Hermann of Berlin, Svyetlana of Moscow and the artist herself â€“ eternal wanderers living somewhere between the real world and a reality they have created by themselves within themselves.
Ewa Witkowska