The Middle of the Day. Artist's artwork is characterized by the examination of various societal models of identification and representation. He uses diverse media: painting, photography, sculpture (frequently in the form of material assemblages), installation and personals ads. His motifs typically refer to an already existing image vocabulary and image system. 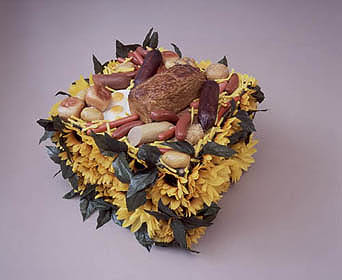 The Middle of the Day

The American artist John Miller (b. 1954) has been living in both New York and Berlin since he received a DAAD grant in 1991. As an artist and critic, he thus works between the U.S. and European contexts. His artwork is characterized by the examination of various societal models of identification and representation. He uses diverse media: painting, photography, sculpture (frequently in the form of material assemblages coated with /John-Miller-Brown/), installation and personals ads. His motifs typically refer to an already existing image vocabulary and image system. As an author and instructor, he writes theoretical essays situated in a Marxist and post-structuralist system of reference, exploring recent art history and theory, as well as artistic and curatorial practices

His current show at Galerie Barbara Weiss features 82 new photographs. They belong to the open-ended series of works titled The Middle of the Day, begun in 1994. The series comprises everyday, informal moments shot between noon and 2 pm in various locations. These small photos often depict lively cityscapes in New York, Berlin or Vienna, for instance, with people of different generations. They are interspersed with quieter and more intimate moments shot in apartments or other interior spaces as well as with views of parks or rural regions. Miller frames them all in the same format and hangs them in a non-narrative and non-hierarchical order at eye level.

The time at which the photos presented in the show were taken is precisely the middle of a normal working day. For many, this is the time of day during which one takes a break and eats something, despite the demand of using the hours allotted to productive labor as efficiently as possible. Here, the work ethic comes up against its bodily limits. Today, however, lunch-breaks or midday meals, as an institution, are being phased out. As Western societies evolve into new information and service economies, many employees can (or must) organize their working day in a flexible manner; some don't even have time for a break. Conversely, those without a permanent job have free time almost all day. As such, the daily periods of work and leisure time are becoming increasingly more indistinct. Ironically, John Miller says, my project could be understood as an attempt to reclaim the middle of the day for a total (aesthetic) production. /But what I am interested in is to document something intangible, something that can only become fixed in a picture if it is placed in a system: the problem of evaluation./

With The Middle of the Day, then, Miller raises questions pertaining to the value of time, of everyday experiences, of work and leisure time, and - something which is not quite as obvious - questions as to how the personalities of artists or other people working in a creative field are constructed and the question of what is rejected and what is saved in everyday life, in art and in culture. Hence, he is engaged with what one could call the complexity of the political economy, wherein everydayness grants direct access to its underlying contents. Its surface, however, conceals and obscures the actual relations of domination.

Miller has noted the impossibility of depicting everydayness and of taking photographs devoid of content. After all, doesn't each depiction of everydayness ultimately turn an ordinary event into an image, an exemplary document, thus destroying its everyday quality? As Miller himself put it,/ I do not claim that my photos can portray the everday life of the masses. Rather, they allude to that possibility through their apparent meaninglessness./ Although Miller conceived /The Middle of the Day /as a documentary project, one can also read it as a quasi-diary or as a mediated self-portrait.

In addition to the photographs, Miller's large sculptures, Topology for a Museum, 1994 and The Absence of Myth, 2003, will be on view. These suggest that the prosaic motifs of /The Middle of the Day/ might be read from such allegorical and enchanted landscapes.