The Imaginary Number: a collection of nine single projects and new groupings of works, including drawings, installations, sculptures and video and film installations. Enthusiasm. Films of Love, Labour and Longing: a project by Neil Cummings and Marysia Lewandowska, the result of over two years of research into Films produced by Poland's amateur Film movement from the 1950s to the mid 1980s. Temporary entrance 2005, ON_AIR by INSTANT, Dirk Hebel and Jorg Stollmann: a temporary architectonic intervention in the KW's entrance. Kiosk XIII - Modes of Multiplication, put together by Christoph Keller: a travelling archive on the current situation of 'independent publishing'. 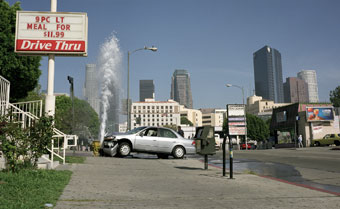 The Imaginary Number is a collection of nine single projects and new groupings of works, including drawings, installations, sculptures and video and film installations. Not primarily a thematic exhibition, the independent works on display share some motifs on various levels, mainly their concern with the complex magic of the everyday - the role of the imaginary in the way we shape and make sense of the world.

In mathematics, the imaginary number makes it possible to solve equations that have no solution in the realm of "real numbers" - the square root of -1 is defined as the imaginary unit i. Initially considered whimsical, the concept of the imaginary unit gained recognition as a profoundly useful instrument in mathematics. Rather than being the description of an antagonism or an irrational illusion or a trick, the imaginary unit opens up a new possibility, a vertical dimension to the horizontal dialectics of positive / negative of the system of "real" numbers.

Used as a metaphor, i suggests the possibility of a passage into the respective, â€œimaginaryâ€, dimensions of a given reality. Borrowing the title from the abstract field of mathematics allows rethinking the real of reality and the unreality of the imaginary. Each of the following works break the emotional and conceptual habits that limit and predetermine the many ways we imagine reality and allow reality to govern our imagination.

Edgar Arceneaux's selected drawings all use the same methodology, questioning the politics of naming, identity and historical narrative. The video Canadian Rain by Trisha Donnelly shows the artist executing a series of unfamiliar gestures, attempting to "create" rain in a distant Canadian forest - the sincere exercise being a demonstration of unthinkable possibilities of the mind and will power. In the main hall, Omer Fast's major new work Godville is constructed from interviews with interpreters of eighteenth-century characters in Colonial Williamsburg, a living-history museum in Virginia, U.S.A. Through cutting and pasting, sampling and remixing the interviews word by word into new sentences, a composite narrative emerges in which temporal markers are blurred and the two biographies of each speaker, real and fictional, are blended into a single rambling whole. In the basement, Rodney Graham's installation Phonokinetoscope shows the artist re-enacting the first acid trip taken by the synthesiser of LSD, Dr. Albert Hofmann, in 1943. On the first floor, Simon Dybbroe MÃ¸ller shows Outside Awareness, a new body of work consisting of miraculous architectonic interventions and sculptures turning past and present and construction and destruction upside down. In Dieu, a video by ValÃ©rie MrÃ©jen filmed in Israel, eight people born and raised in ultra-Orthodox Jewish families speak about their departure from religion to secularism. On the second floor, Jimmie Durham shows his sculpture "Do you say I am lying? Of course not, we are friends. We never lie to each other. When precision limits us we use words that will lie for us" next to the installation Again for tomorrow 4 (before 3) by David Maljkovic, a kind of a static, futuristic travel machine. In the attic, the exhibition concludes with Klaus Weber's installation Sick Fox, a duet between an ape-man and a pack of crickets to the rhythm of a fortuitous fountain.

Curated by Anselm Franke and co-curated by Hila Peleg, The Imaginary Number is the first of a series of exhibitions and projects in the future KW programme that engages with the social aspects of imagination and the realities of systems of belief. Among smaller events, this series will find its continuation in the Summer of 2006 with a collaborative exhibition by Natascha Sadr Haghighian, Judith Hopf and Ines Schaber on invisibility, haunting and the phenomena of spectrality.

A booklet designed by Manuel Raeder will be available.

With kind support from the Embassy of the United States, Berlin, Galerie Kamm, Berlin and Cookie

Films of Love, Labour and Longing

A project by Neil Cummings and Marysia Lewandowska

Enthusiasm: Films of Love, Labour and Longing is a result of over two years of research into Films produced by PolandÂ´s amateur Film movement from the 1950s to the mid 1980s. Under socialism, "leisure" in Poland was organised through factory-sponsored clubs and associations, the most popular of which encouraged the making of 16 mm films. This exhibition explores how such amateur endeavours became an asylum for the marginalised - for dreams of happiness, love and freedom. Working outside of â€žofficialâ€ culture, the amateur or enthusiast frequently adopts a creative counter-cultural tone of tactical resistance and criticism. The film club enthusiasts inverted the familiar logic of work and leisure, becoming truly productive when pursuing their own passions.

In the exhibition, a "reconstructed" club interior bears witness to the social and creative history of the clubs and their members. It gathers festival trophies, diplomas and badges revealing some of the aspects of this now forgotten network. A selection of the astonishing films - collated into three themes of Love, Labour and Longing - range from 2-minute animations, short "experimental" and "abstract" films and documentaries to historical dramas, features and ambitious mini-"epics". The Love section reflects the joy of everyday life, with themes of sexual desire, glamour, childhood tenderness and humour. The films in Labour depict the various spaces of production; heroic physical work, pointless labour, bureaucracy and even the work of filmmaking itself. The films in Longing explore personal, political and sexual longing via themes of partying, seductive consumerism and political satire. Creating three separate cinema spaces solely out of richly coloured velvet fabric enhances the sensual experience of the films. An "Archive Lounge" provides access to a growing archive of films gathered by the artists but not featured in the main body of the exhibition. The visitors are encouraged to "curate" their own programme out of the material.

The exhibition celebrates the films of the hundreds of ordinary people whose enthusiasm for film was both an outlet and a forgotten cultural resource.

As part of its collaboration with P.S.1 / MoMA, in summer 2004, KW initiated an architectural competition for a temporary architectonic intervention in the KW's entrance. KW's aim was both to provide an emerging architectural office a platform and to improve KW's visibility from the street. An international jury has selected the proposal On Air by the Berlin / Zurich-based office INSTANT (Dirk Hebel and JÃ¶rg Stollmann).

On Air is a transparent, self-supporting balcony that will extend KW's facade into the public realm. The inflatable structure resembles a balloon or a floating cushion and allows additional space without interfering with the existing building, which dates back to the 18th century and is protected as a certified monument.

So-called tensairity elements, an innovation in pneumatic construction developed for ultra-lightweight structures, will stiffen the overall structure, and allow visitors to float in space and look over the street.

With kind support from the Stiftung Deutsche Klassenlotterie, Berlin

Kiosk XIII -- Modes of Multiplication
put together by Christoph Keller

A travelling archive on the current situation of â€œindependent publishingâ€, with over 230 independent publishing projects, periodicals, alternative artzines, audio and video labels on contemporary art, compiled by Christoph Keller (Revolver) with help from the participating projects.
The archive provides an overview of the various models of multiplication and distribution of artistic ways of working and gives an insight into various strategies, programs, and motivations of the participating publishers and editors. At present the collection covers circa 3,500 publications, whereby the focus is not on the special quality of a program nor on the individual artistic publication, but on providing an overview of the spectrum of contemporary artistic publishing.