Towards a Promised Land. An Artangel's new commission. The project has involved 22 children and young people who arrived on the Isle of Thanet from both near and far. Some of them come from places affected by war, poverty or political strife; others have been affected by domestic upheaval. Working with the artist, they have learned, through photography, to explore their imaginations and express different experiences of relocation and the search for a better life. 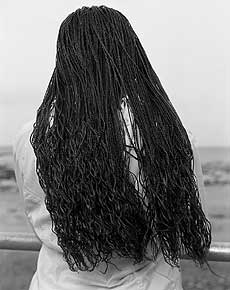 Towards a Promised Land

The white cliffs of Margate are the setting for the beginning of Towards a Promised Land, Artangelâ€™s new commission by renowned photographer, Wendy Ewald, in collaboration with Creative Partnerships, Kent.

Towards a Promised Land has involved twenty-two children and young people who arrived on the Isle of Thanet from both near and far. Some of them come from places affected by war, poverty or political strife; others have been affected by domestic upheaval. Working with Wendy Ewald, the children have learned, through photography, to explore their imaginations and express different experiences of relocation and the search for a better life.

Ewald has taken portraits of the children in locations of their choosing around Margate and photographed the belongings they brought with them on their journeys. These portraits, capturing the children at turning points in their lives, will be displayed as huge photographic banners in locations around Margate. Margateâ€™s Sea Wall is the first of these locations, where, from 9 July the portraits of Uryi, Zaakiyah. Ashlea, Rabbie and Ali Reza can be seen between Margate Harbour and Palm Bay. Later in the year they will be joined by Omar, Gareth, Glenn, Liridon, Christian, Gemma, Naomi, Nancy and Monica at other locations around Margate.

Over the past year Wendy Ewald has developed Towards a Promised Land photographing and interviewing the children as well as teaching them how to take their own photographs. An exhibition curated by the children, of their photographs and stories about the project will be displayed at the Outfitters Gallery in Margate from 9 July until 29 August 2005. The Gallery will also house the Towards a Promised Land archive of maps, films, books, sound recordings and interview transcripts.

Towards a Promised Land also marks the countdown to The Margate Exodus, Artangelâ€™s major new commission, to be staged in the summer of 2006 and made into a film for Channel 4 by director Penny Woolcock.

For more than thirty years, artist Wendy Ewald has photographed and made videos with children and young people around the world so encouraging her students to become photographers and working as a â€œtranslatorâ€ of their experiences. Ewaldâ€™s long-standing commitment to helping children realise the worth of their own visions has gained her international recognition and numerous awards.

The Outfitters Gallery is a childrenâ€™s gallery run and managed by Creative Partnerships, Kent.

Access
The coastal path along the Sea Wall is uneven in places and sturdy shoes are recommended. Access for wheelchairs by ramped pathways. Large print copies of this brochure are available from the Outfitters Gallery, address details above. For further details about access to Towards a Promised Land please email access@artangel.org.uk

Creative Partnerships is a government-funded programme, delivered through Arts Council England, that aims to give schoolchildren in deprived areas throughout England the opportunity to develop creativity in learning and participate in cultural activities. For more information, visit http://www.creative-partnerships.com

Towards a Promised Land is supported by Small Voice, a charity founded by Sean French and Nicci Gerrard to donate money to one-off projects.

Location
Towards a Promised Land is located along the Sea Wall between Margate Harbour car park and Prince's Walk, Palm Bay. Nearest parking: The Rendezvous car park by Margate Harbour.