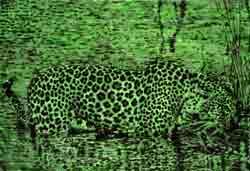 The exhibition at Hamburg's Deichtorhallen is intended as a rediscovery. Dokoupil took part in the opening show at Deichtorhallen back in 1989 and is today again exerting a considerable influence on young artists, and here he is presented as one of the most exciting contemporary artists. With new and hitherto unknown blocks of works, including his Leopard, Buddha and Whip cycles of recent years, the exhibition is the first in Germany to focus on the full range of Dokoupil the "inventor-machine".

The exhibition includes 200 paintings and sculptures from 29 series, dating from 1981 to 2005, kindly loaned to us by countless international institutions and collectors. Dokoupil himself has devised a spectacular one-man museum specially for the Deichtorhallen show featuring 29 rooms and 29 different styles.

As of "documenta" 1982 the now 50 year-old Czech-German painter decisively influenced the young painters of the 1980s. Dokoupil's witty and marvelously accomplished paintings also had a strong impact on the international art world. His oeuvre starts from a use of archetypal pictorial themes, which he contrasts to the contemporary everyday consumer world. Since 1986 Dokoupil has been painting without a brush â€“ he lived first in Cologne, and today in Berlin, Prague, Madrid, and on the Canary Islands. He has instead opted for a wide variety of different techniques, such as candles, car tires and color spray paints. This has given rise to an exceptionally varied oeuvre which displays the broad spectrum of painterly possibilities available today.

In early 2006 the exhibition will go on show at the Prague National Gallery.

Catalogue
The 304 page catalogue has been published by DuMont-Verlag in a bilingual German/English edition. It is edited by Robert Fleck and Wilfried Dickhoff, with contributions by Josefina Ayerza, Robert Fleck, Thomas Hoppe, and Slavoj Zizek.