The crossing of boundaries that has been taking place in the fields of art, music, literature, radio and film since the 1960s 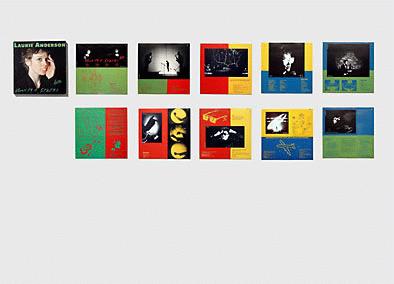 Demonstrating considerable diversity, this exhibition project displays the crossing of boundaries that has been taking place in the fields of art, music, literature, radio and film since the 1960s, through a series of activities from August 21st to November 27th 2005.

Parallel to the exhibition, Vinyl. Records and Covers by Artists, five supplementary exhibition modules will enhance the visitor's experience of Sound Art. These include concerts, a radio program, the international conference, Sound Art â€“ Between Avantgarde and Pop Culture, the Art Market for Sound Art and the film week, Sound Art Cinema, enabling us to fully experience the tonal world of the artists represented.

Vinyl â€“ Records and Covers by Artists (Exhibition August 21st â€“ November 27th, 2005) With over 800 artists' records and other sound supports the exhibition shows the dual facets â€“ visual and sound â€“ of a unique dimension in art. All the major 20th-century trends in are represented, ranging from early avant-garde movements through the high point of Sound Art in the 60s and 70s, to the present approaches. For the pop and rock world, visual artists have created impressive works of art in the 31 x 31 cm sleeve format, among them Roy Adzak, Roy Lichtenstein, Raymond Pettibon, Robert Rauschenberg, Andy Warhol or Richard Hamilton, whose "White-Album"-Cover for the Beatles became a classic work of this genre.

Vinyl is an exhibition for the eye and the ear - graphic works, multiples and objects from the field of Sound Art complement the visual world represented by the covers. In terms of acoustic presentation, around 300 records are at the visitor's disposal, including many compilations.

This exhibition is a project in coproduction with MACBA (Museu d'Art Contemporani de Barcelona) and will be shown from May 16th till October 1st 2006 at the MACBA.

Sound Art â€“ Between Avantgarde and Pop Culture (Conference September 30th â€“ October 2nd)
Since the classical avant-garde, a large number of intermediate artworks have emerged in a border area between art, literature, music, film, radio and theatre. These published, reproduced and otherwise publicized sound works and sound interventions evade definition by all traditional concepts of art. This conference on Sound Art not centers on the original artwork, such as the sound installation, but on sound works as the manifestation of a completely new approach to art.

One aim of the conference is an academic perusal of this previously neglected field of research, whereby it also hopes to initiate an exchange between art, literature, media and music theorists, radio experts, publishers and artists.

Topics of study will range from the radio theory of Bertolt Brecht to artists' projects via Internet radio, from the importance of sound in film to the media conditions of Sound Art since the 1960s and its place in the history of the Russian avant-garde. Even its origins in the early 20th century still await investigation. There is also a need to examine current questions from a historical perspective.

The conference is organised in cooperation with the "Research Association Artist's Publications".

Art Market for Sound Art (September 30th â€“ October 2nd 2005) Publishers, antiquarian and dealers from all over Europe have been invited to the art market to present their program and their stock on records and CDs, and to demonstrate Sound Art's consciously sought link between art and life to visitors in a vivid, concrete way. For three days, the market represents an authentic addition and complement to the exhibition, concerts and conference.

Concerts
The concerts will consist of Action or Performance Art from the reading or presentation of Sound Poetry till the Electronic Music.

This series of several concerts intends to demonstrate the approaches to the Vinyl medium. Since a large part of Sound Art implies performance or consist of concert recordings, these events aim to point out Sound Art's original contexts and the conceptual links between art, music and literature.

Sound Art Cinema (Film week November 2nd â€“ 6th, 2005) The series of films will demonstrate the interdisciplinary character and the influences of Sound Art in an exemplary way. On the one hand, screenings will include films and videos by artists in the context of Sound Art, but the series will also comprise avant-garde, experimental and commercial films which work with sound effects, experiments and film music, or belong to the category of music films.

The film week is a project in cooperation with the cinema "Kino 46".

Project direction and curator of the exhibition modules:
Anne Thurmann-Jajes, Head of the Research Centre for Artist's Publications/ASPC