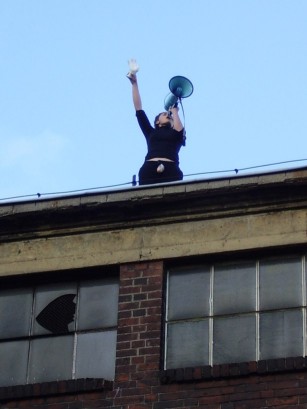 The past remembered or rather memorised? Based on facts or feelings? Material or immaterial? In his 1981 feature film, â€œThe Man of Ironâ€, Andrzej Wajda re-enacted the scenes memorised from famous photographs and TV news items from the strikes in Gdansk Shipyard. He mixed up staged situations with genuine documentary recordings, making not only a movie but, more importantly, a significant operation on the collective memory. Along with the famous Solidarnosc logo by Jerzy Janiszewski, the film lays the foundations of the international visual legacy of the 1980s in Poland. Aneta Szylak, the curator, takes these two artefacts as points of departure for â€œDockwatchersâ€, building the intellectual premises of the exhibition on re-enactment, revision of symbolic values as well as visible and invisible shifts in cultural memory.

With â€œDockwatchersâ€, happening alongside the official celebrations of the 25th anniversary of Solidarnosc, Wyspa targets beyond officially represented history. It asks about oral histories, cracks in memories, abandoned visions and desolated heroes. â€œDockwatchersâ€ addresses the person, the individual, caught up in political and historical processes, whose personal memory is inscribed in collective experiences, the official representations of history and various forms of commemoration and mythologisation.

The project was made possible through the partnership of Espace Croise in Roubaix and Kunstverein in Hamburg in collaboration with Fundacja Signum in Poznan, the French Embassy in Warsaw and the Goethe Institute in Warsaw.