The 9th International Biennial, curated by Charles Esche and Vasif Kortun. The title is ''Istanbul'', referring both to the real urban location and the imaginative charge that this city represents for the world. The exhibition is being realised through Artist Residency Programme, a scheme of extended residencies in 2005, providing the artists with the opportunity to directly encounter the urban conditions, history and future of the city. The project takes various forms, from lectures and events, metaphoric maps and catalogue essays, to tours and travel advice. 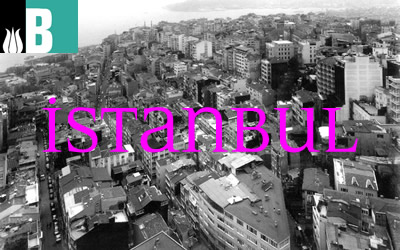 The 9th International İstanbul Biennial, organized by the İstanbul Foundation for Culture and Arts and curated by Charles Esche and Vasıf Kortun will open on Friday, 16 September 2005 with an opening ceremony at Antrepo no.5 starting at 19:00 . There will also be a party on the same night starting at 23:00. On Thursday, 15 September, there will be a press conference from 10:00 to 11:00, which will be followed by a tour with the guidance of the curators at 13:00. The opening of the Hospitality Zone and Book Launch will be on the same day at Antrepo no.5 at 17:00 . The book launch will be organised in order to promote and introduce publications such as the biennial reader, some new books on art, and the artist publications by some artists including Hatice GÃ¼leryÃ¼z and Oda Projesi . On Saturday, 17 September, there will be a panel discussion with the participation of several Afghan artists and curators from 11:00 to 12:00. On the same day from 19:00 to 20:00, there will be a perfume launch introducing a project entitled Eau d'Ernest by one of the biennial artists, Daniel Bozhkov, who has developed a perfume inspired from Ernest Hemmingway for the Biennial.

The title of the 9 th International İstanbul Biennial is İstanbul, referring both to the real urban location and the imaginative charge that this city represents for the world. The exhibition of the Biennial is being realised through Artist Residency Programme, a scheme of extended residencies that range from three weeks to three months in 2005. Artist Residency Program provides the artists with the opportunity to directly encounter the urban conditions, history and future of İstanbul within the framework of the 9 th International İstanbul Biennial. The invited artists will contribute to the Biennial with works inspired by İstanbul or reflect upon the city with work that contrasts with the environment and the conditions of İstanbul . Artists who have been hosted in İstanbul or will be part of the residency scheme include Daniel Bozhkov, Erik GÃ¶ngrich, Karl-Heinz Klopf, Mario Rizzi, Phil Collins, Pilvi Takala, Servet KoÃ§yiğit, Solmaz Shahbazi, Yael Bartana, Silke Otto-Knapp, Michael Blum, Jon Mikel Euba and the artist group Ruangrupa.

The 9 th International İstanbul Biennial will be situated in several small and large scale spaces in the Taksim-Galata region of İstanbul, preferring to work in sites that have a more common reference to the every-day rather than using monumental historical places as in the previous biennials. The main venue of the Biennial will be Antrepo no.5 which will host the Hospitality Zone and the 9B Positionings Programme. The Hospitality Zone will be a space for guest exhibitions, such as the Young Turkish Artists exhibition curated by Halil Altındere and an exhibition of the Hafriyat Group. Developed in parallel with the 9 th İstanbul Biennial, the 9B Positionings Programme will spotlight different cultural phenomena within the city and beyond. This project will take various forms, from lectures and events, metaphoric maps and catalogue essays, to tours and travel advice. In this way Positionings will highlight and support by affiliation concurrent projects in the city and internationally that further elaborate and/or offer different perspectives on the proposals of the biennial. Through these activities Antrepo no.5 is to become a meeting point in the city with various social and artistic activities which also include press conferences, opening ceremony, meetings with the artists, workshops, conferences, performances and parties.

There will be two main publications of the 9 th International İstanbul Biennial; a comprehensive short guide and a critical reader dedicated to the conceptual framework of the biennial, both of which will be available at the opening. The short guide is designed to inform the visitors about the actual works they see at the exhibition. Bringing together texts from academics and artists from Turkey and abroad, the reader will contain articles on art, democracy and city that lay out and articulate the conceptual structure of the biennial. The reader will also contain 25 photographs of İstanbul taken by the Italian photographer Gabriele Basilico who was invited to İstanbul to work on a series of photographic images of İstanbul in March 2005. His photographs will also be seen on several other printed materials such as poster, billboards and postcards as well as the official website of the biennial.

Within the 9th International İstanbul Biennial, a weekly newspaper will be published with the collaboration of Radikal newspaper. The Biennial Newspaper will be published every Friday starting from September 1 for two months and will include artist pages, interviews, pages related to the biennial projects, international and national art news, critical essays, curatorial columns, reports from the artist assistants, articles and debates.

Parallel to the 9 th International İstanbul Biennial's intent to expand its presence beyond the formal limits of the exhibition, a series of panels and talks with the title 9B Talks are designed to take place throughout the year starting from October 2004 until the opening of the Biennial. Artists, valuable speakers such as academics, writers and curators with expertise in areas related to the conceptual frame of the 9th İstanbul Biennial are invited. Through these talks artists are given the opportunity to present themselves and their areas of interest to the Turkish public. These talks also provide a platform of discussion and exchange between the artists and the audience while they also make the Biennial a yearlong activity and discussion arena on the artistic and social issues pointed at the Biennial.

There will also be a parallel exhibition at Van AbbeMusuem in Eindhoven, the Netherlands within the framework of the İstanbul Biennial. The Eindhoven exhibition will be sharing some artists and drawing on the history of past İstanbul Biennials to represent the idea of "elsewhere" in all its complexity within an international art museum. In doing so, it will pose questions about the hierarchy between the stable art museum context and the transient Biennial event.