Simon Bedwell, Adam Dant, Ross Downes, Jeremy Fay, Graham Hudson, Caroline McCarthy, Simon Periton, Brian Reed, Bob and Roberta Smith, Gavin Turk. The causes of the works exhibited are legion and yet all represent accurate interpretations of England that are characteristically English. A national identity dependant on a sceptical self- analysis provides the means to produce art-works taking their cue empirically and traditionally from the various problematic social phenomena of monkey island. 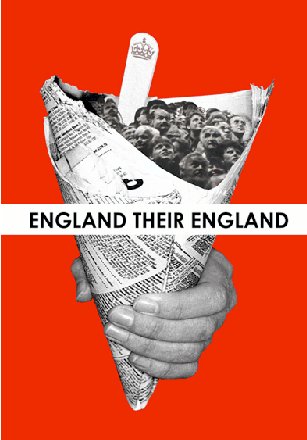 Nothing is causeless, even the fact that Englishmen have bad teeth can tell you something about the realities of English life. Orwell

The causes of the works exhibited in England their England are legion and yet all represent accurate interpretations of England that are characteristically English. A national identity dependant on a sceptical self- analysis provides the means to produce art-works taking their cue empirically and traditionally from the various problematic social phenomena of monkey island. Although renowned internationally as hooligans, colonialists and xenophobes, the tradition of absurdist and satirical humour is this nations saving grace. A popular consciousness informed through culture and subcultures ability to relate a distrust of the current order and establishment has always provided England with a levelling social-awareness. Whether in the posturing radicalism of punk, the anthropological socialism of George Orwell, or provocative satirists such as Will Self and Chris Morris the collective consciousness of this country has always been partially informed by those artists able to straddle the mainstream and underground. In doing so an underlying critical agenda with a pragmatic realism highlights the hypocrisies and dissatisfaction of the sceptic Isle.

The ideas expressed are not those dealing solely with introverted domestic national issues but instead display current practices able to communicate philosophic and satirical reflections on subjects which can be viewed in any number of disseminating ways. The subjects of class, consumerism, national identity, religion, spectacle, media metanarratives etc continue to be necessary subjects for art, particularly in a time, here in Britain at least, of centralised political parties and in the face of the impossibilities compounded in the desire to contribute political messages via art in post-ideological times. Political works that don t require the banal ballot crosses of past ideological thinking makes for a show intending to reach a broad audience mindful of high-culture s complacent anti-social failings. The artists here show a willingness to communicate critical ideas without limiting the prospective audience to a specialised, art school educated one. Whether it be the inherent irony of DIY aesthetics or the significance placed on the recurrent banalities of everyday life the work shares a sense that the culture industry has a responsibility to provoke the questions which cause us to reflect on social matters at large which relate to the lives of a social majority and not merely providing commodifyable investments to a moneyed minority.

The remnants of impossible idealism are accompanied by the sceptical laughs of the societaly aware artist. Without wanting to fall in to the traps of the educational/ revolutionary pretentions of passed avant-gardes but equally unwilling to nihilistically play out the perpetually irreducible games of postmodernism England Their England presents a cross section of London based artists at varying stages in their careers.

Free Association is a UK based collective of artists, curators, writers and cultural practitioners engaged in widening cultural discourse with overseas partners through exhibitions and unique projects. There is no membership card, no fee and no office. Members simply require professional knowledge and enthusiasm. Participants are invited to join debate as each project dictates.

Free Association was formed in 2003 by Colin Ledwith, Jari Lager and Mark Titchner. Please email us at: Freeassociation3@aol.com