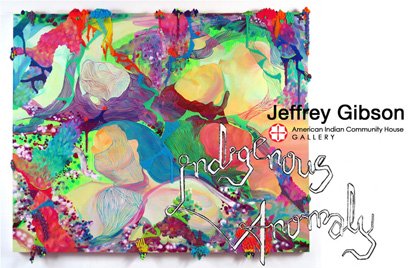 Indigenous Anomaly Curated by Kathleen Ash-Milby Jeffrey Gibson is a true artist : one of those who think of re-making a different world based on the one given to us. He is a tailor cut from the fabric of the great adventurers of art : someone who knows how to make a cut, choose strangeness, to offer himself up to the event. And further: re-sew. To detach and join again.

HÃ©lÃ¨ne Cixous, 2005; from the essay, HÃ©riter/Inventer avec Jeffrey Gibson, to be included in a forthcoming catalogue in 2006/07

The exhibition will feature five mid to large-scale oil and pigmented silicone paintings, plus works on paper. This new body of work marks the emergence of human forms within the lush and visually intoxicating environment that Gibson has been painting for the past two years.

The artist continues building the fantastical landscapes using layers of intensely colored marks, glossy and transparent pours, and his signature use of pigmented silicone, which seems to grow from the imagined terrain meandering across and off of the painted surface.

The figures in the new landscape are engrossed in this sensual environment where, according to Gibson, â€œno hierarchy of man/woman over nature exists.â€

This series depicts a blissful state of utopia where couples are forming and people are frolicking, but there are small clues that this is a momentary condition.

As concerns from the real world encroach, â€œeventually the â€˜highâ€™ will wear off and the characters will succumb to their earthly desires and selfish motives.â€

About the Artist
Jeffrey Gibson (b. 1972) is a painter and sculptor living in Brooklyn, New York. He received his Master of Arts degree from the Royal College of Art in London, England in 1998. Before moving to New York, Mr. Gibson exhibited in group and solo shows in both London and Norway.

Jeffreyâ€™s work was recently featured in Out of Bounds; curated by Jennifer McGregor, at The Glyndor Gallery @ Wave Hill, From the Root to the Fruit at Alona Kagan Gallery and Le DÃ©sert de Retz at Massimo Audiello, both curated by David Hunt.

He has also recently been awarded a Creative Capital Grant to fund a significant body of work to be shown later this year. Jeffrey Gibson is represented by Samson Projects in Boston.

Exhibition Funding
Jeffrey Gibson: Indigenous Anomaly is part of the American Indian Community House Exhibition Program, supported by the New York Council for the Arts, and the New York City Department of Cultural Affairs, and The Creative Capital Foundation.

Art Talk: Jeffrey Gibson Saturday, October 22, 2005, 2PM Artist Jeffrey Gibson will give an illustrated lecture about the development of his work as a painter, and the current series at the American Indian Community House, hosted by the National Museum of the American Indian, George Gustav Heye Center, One Bowling Green, NY, NY, in the Video Viewing Room. More information: 212-514-3700.

The exhibtion is Guest-Curated by Kathleen Ash-Milby, Assistant Curator at the National Museum of the American Indian, Smithsonian Institution.

Jeffrey Gibson is represented by Samson Projects in Boston

For any further Information: http://www.samsonprojects.com