Deedie. Achaintre's hand-tufted rugs and delicate drawings push the interface of subcultural styles and the boundaries of sculptural form. Her work has been described as 'portraiture of near monsters', as a result of her development of the twisted and glamourised imagery from horror films and heavy metal graphics. 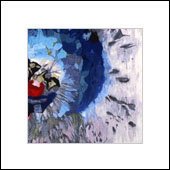 The Showroom is delighted to present a newly commissioned body of work by London-based artist Caroline Achaintre. Achaintreâ€™s hand-tufted rugs and delicate drawings â€“ that work with imagery drawn from a variety of different sources including the goth-metal scene â€“ push the interface of subcultural styles and the boundaries of sculptural form.

Achaintreâ€™s work has been described as â€˜portraiture of near monstersâ€™, as a result of her development of the twisted and glamourised imagery from horror films and heavy metal graphics.

The juxtaposition of the dark, brooding subject matter associated with horror and heavy metal and the aesthetic lightness of the watercolours echo in their form the sensitivity of the goth myth teenage scene and their attraction and cultivation of the representation of brutal and nihilistic fantasy.

The result is an odd tension between content and form, and sees Achaintre playing with aesthetic forms. For example, her woodcuts, a form traditionally associated with Expressionism, which communicates the intense emotional stuff of the subject matter, are thrown into stark relief by the visually seductive and light imagery of the watercolours they accompany.

For The Showroom, Achaintre will present two new major, large-scale, hand-tufted rugs made specifically to disrupt the unusual architecture of The Showroom alongside her gestural woodcuts and a series of subtle digital and watercolour drawings.

In addition, Achaintre will experiment with structural forms that support, display and interact with the work itself to echo the sense of tension and danger.

Since graduating from Goldsmiths MA Fine Art in 2003, Caroline Achaintreâ€™s work has been included in a number of group shows including Acid Rain, Galerie Michel Rein, Paris, Contropop Vamialiâ€™s, Athens and The Unhomely, Kettles Yard, Cambridge. She has also made solo shows for spaces including Lawrence Oâ€™Hana, London and Mirko Mayer Galerie, Cologne. DEEDIE will be Achaintreâ€™s first major solo show in a publicly funded gallery.

Rob Tufnell, Exhibitions Curator at Turner Contemporary, Margate will present a talk about Caroline Achaintreâ€™s practice at The Showroom on Saturday the 29th October at 16.00hrs. This event is free.