New Report. In the performance the subjects include the artists' friends, bodies, anxiety, the closing of a feminist bookstore, random acts of dancing, and an evening bath. These 'breaking reports' are broadcast live to the newsroom for comment, and then out to their studio audience. 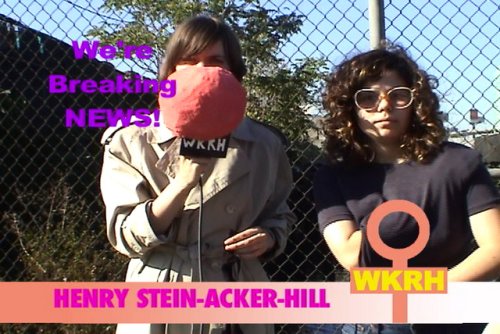 New Report is part of The Dare Series, a program of new performance curated by Lauren Cornell.

Foxy Production is pleased to announce New Report, a performance by Wynne Greenwood and K8 Hardy. For the third edition of The Dare Series, Greenwood and Hardy present a live newscast from the feminist TV news station, â€œWKRH - Pregnant with Information.â€

As Henry Irigaray (Hardy) and Henry Stein-Acker-Hill (Greenwood), the artists stage reports on subjects that might not otherwise be considered newsworthy, including their friends, their bodies, their anxiety, the closing of a feminist bookstore, random acts of dancing, and an evening bath.

These "breaking reports" are broadcast live to the newsroom for comment, and then out to their studio audience. While exploring the nature of news as we know it, its parameters and its packaging, New Report delves into underrepresented spaces, crises and histories.

Wynne Greenwood is an artist who lives between New York, Washington and California. In 2000, Greenwood founded the band Tracy + the Plastics, in which she plays all three band members, singing live as Tracy while interacting with the other two members (Cola on drums/ Nikki on keyboards) on a video screen.

The band tours often, performing at a range of venues that has included Harvard University, the Plains Art Museum in Fargo, ND, queer discos, made up art spaces, and the Whitney Biennial (2004). At The Kitchen this past winter, Greenwood collaborated with Fawn Krieger to install a larger than life living room that set the stage for the performance, ROOM.