Dim, new works by the artist. Turning off the lights is ostensibly the subject of this group of video works. A can of Dulux gloss paint, some electrical insulation tape and a catapult are variously employed, at times nervously, comically and occasionally with near surgical precision as Calderwood sees the task through. 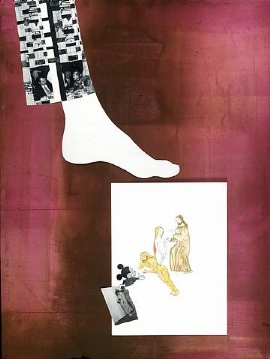 David Risley Gallery is delighted to present DIM, an exhibition of new works by Matt Calderwood.

Turning off the lights is ostensibly the subject of this group of video works, going for the bulb and extinguishing the light in a physical way rather than just using the switch means the usually instantaneous transition from light to dark can be stretched and examined in normal time. A can of Dulux gloss paint, some electrical insulation tape and a catapult are variously employed, at times nervously, comically and occasionally with near surgical precision as Calderwood sees the task through.

Weâ€™re left in the dark.
An earlier piece, Light (2004), in which Calderwood approaches a lamp post in a snowy landscape, shins up it and turns out the light, bears obvious similarities to this group, then we were left in the dark too. However in the earlier work the light bulb and (in the end) the artist are out of shot, the action is unseen and the exact means remain open to speculation. Here it appears to be all about the method, in fact in two of the works and for the first time in his videos the artist is not seen.

Itâ€™s not about the artist.
The fade to black in film suggests a completion, a situation put to bed, over. It offers a moment in which to relax and reflect. Dimming the lights on the other hand suggests anticipation. In the theatre or cinema the lights go down to obscure distraction and focus attention upon the main event. Calderwoodâ€™s new works make the dimming and fading the main event. The work deals with the physicality of projected light, as the light is gradually reduced on screen the gallery darkens.

Matt Calderwood has recently shown at Saatchi Gallery, London, Tate Britain, London and Dublin City Gallery the Hugh Lane, Ireland. His work is widely represented in public and private collections internationally. David Risley Gallery will be presenting a solo project at Loop, Barcelona his work will also feature in Video London, Off Loop, curated by Jen Thatcher and Keith Patrick.