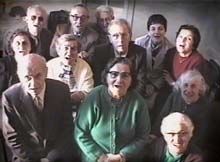 P.S.1 Contemporary Art Center is pleased to present the solo New York museum debut of Milan-based, Albanian artist Adrian Paci. This exhibition includes two recent video installations, Apparizione, 2000 and Turn On, 2004, as well as a new video work, Klodi, 2005, produced specifically for P.S.1. This exhibition is on view from October 23, 2005 through January 23, 2006.

Paciâ€™s body of work addresses the radical political shifts of his homeland and his experiences as an exile. He reinvented his life after leaving Albania in 1997 when civil war triggered widespread rioting and looting. Fearing for the safety and security of his young family, Paci relocated to Italy. His artistic voice and vision changed as the reality of his experiences at home and abroad began to inform his practice. For him, art and life became interchangeable, one flowing into the other. Through his work, Paci inserted himself into social situations, engaging both his private and public life in an effort to discover (or recover) how we live. By creating works situated in the everyday, Paci reveals the ways in which our lives are interconnected and how we are shaped by our environmental boundaries.

Paciâ€™s process is a quest to understand his designated â€œplaceâ€ in the body politic, as well as what society expects that place to be. Challenging the conditions of his personal history, placing himself in the public domain, or recreating situations as a means to comment on the cruelty, inequity, and the sometimes irrational character of our socio-political circumstance, Paci reveals how identity is shaped and socially conditioned by the global socio-economic apparatus.

In the dual-screen Apparizione, Paciâ€™s youngest daughter Tea sings an Albanian song to her relatives back home. They, in turn, respond by completing the verse. This back and forth between Tea and her familial chorus is a moving metaphor that underscores the stinging realties of their geographical separation.

To film Turn On, Paci returned to his birth city of Shkoder. The video opens with a series of close-ups of middle-aged Albanian men. Their faces are worn, weathered and tired. Assembled on public steps in the town square, they sit patiently as if in an interminable state of waiting. Time appears to stand still, save for a constant flow of electricity and bulbs of light symbolizing a city in transition to modernity.

Klodi, produced for this exhibition, is based on a touching, dramatic and at times absurd tale told by Klodi, an Albanian man Paci met. The story, which parallels Paciâ€™s own experiences as an Ã©migrÃ©, is told in a thirty-minute video detailing his adventures traversing foreign borders in search of something that in the end becomes almost unattainable.

Adrian Paci was born in 1969 in Shkoder, Albania. His work is included in the 2005 Venice Biennale and a solo exhibition organized by the Contemporary Arts Museum in Houston opened in July 2005.

(Long Island City, New York â€“ August 16, 2005) P.S.1 Contemporary Art Center presents The Painted World, an exhibition featuring work by twenty-three painters for whom abstraction offers a means to convey a world of their own making. The intergenerational roster of artists makes significant connections clear between abstract painters working from the 1950s to today. This exhibition is on view from October 23, 2005 through January 30, 2006.

The painters in this exhibition may appear less concerned with how the world looks than with how the world feels. They offer a sensual feeling for space, referring to organic and natural forms, architecture, movement and perception. The artists also make us aware of the space in the room around us, and of our own presence.

The Painted World includes paintings by important, historical figures such as Paul Feeley (1910-1966), Yayoi Kusama, and Myron Stout (1908-1987); two influential artists whose lives and careers were cut short, Moira Dryer (1957-1992) and Steven Parrino (1958-2005); and younger artists who are seriously pursuing abstraction, such as Mark Grotjahn and Ann Pibal. Alex Hay, an artist best known for his paintings of the 1960s, and who after a long hiatus began to exhibit his work again in the last two years, will be represented by a painting shown for the first time entitled Old Green â€˜05. New works are being made for the exhibition by Philip Taaffe and Dan Walsh, while Alex Kwartler will create a site-specific wall work and painting installation. Other artists in The Painted World include: Wayne Gonzales, Mark Grotjahn, Joanne Greenbaum, Mary Heilmann, Cannon Hudson, Lucas Kelly, Bill Komoski, Chris Martin, Olivier Mosset, Michael Scott, John Tremblay, Alan Uglow, and Chuck Webster.

This exhibition is curated by P.S.1 Curatorial Adviser Bob Nickas.

The Painted World is supported in part by public funds from the New York State Council on the Arts, a State Agency. Exhibitions at P.S.1 are made possible by the Annual Exhibition Fund with support from Peter Norton and the Peter Norton Family Foundation, Christopher Daly, Brandon Paul Coburn, and The Junior Associates of The Museum of Modern Art.

(Long Island City, New York â€“ August 16, 2005) P.S.1 Contemporary Art Center is pleased to present an exhibition of works by Peter Hujar, one of the most important and influential New York photographers of the 1970s and 1980s. This is the first American museum exhibition devoted to Peter Hujar since 1990, an artist whose reputation has steadily grown since his death in 1987. On view from October 23, 2005 through January 16, 2006, it will include more than seventy photographs, most of which have never before been exhibited or reproduced.

The range of Hujarâ€™s subjects â€” studio portraits, nudes, landscapes, the city street, modern ruins, animals â€” will be presented in a monographic rather than chronological manner. Working exclusively in black and white, Hujar vividly documented a New York that has been all but lost to us today, most notably its streets, architecture, nightlife and demimonde. His portraits of well-known figures such as Susan Sontag, Andy Warhol and William Burroughs, but also of anonymous street people, circus and drag performers, are all highly regarded. In a sense, everything for Hujar was a portrait. Whether he was photographing a person, a dog, or a tree, his subject always seems to be posing for the camera, aware of being photographed, yet never self-conscious.

Hujar was a contemporary and friend of Diane Arbus, and both were admirers of Weegee and shared his dark vision. Regardless of subject matter â€” from the catacombs in Palermo to abandoned, wrecked cars â€” Hujar is a classicist whose distinctive style echoes further back to historical figures such as Atget and Brassai. Hujar was a mentor, friend and lover to the artist and writer David Wojnarowicz, and his work would influence the photographers Nan Goldin and Robert Mapplethorpe. His sensibility, concentration and eye for detail, and feel for light and texture enable him to find, as both Atget and Brassai in Paris before him, mystery where none is apparent, beauty in the mundane, and grace in disintegration. All of Hujarâ€™s work is imbued with a deep sense of mortality, and, as he makes visible an awareness of life and death as forever enmeshed, a depth of soul.

Born in Trenton, New Jersey in 1934, Peter Hujar received his first camera in 1947. His works have been exhibited throughout Europe and the United States, including the Kunsthalle Basel, Grey Art Gallery and Study Center, Stedelijk Museum and Fotomuseum Winterthur. He died of complications accompanying AIDS in 1987.

This exhibition is curated by P.S.1 Curatorial Adviser Bob Nickas.

P.S.1 Contemporary Art Center presents Stephen Shore: American Surfaces, a solo exhibition by the acclaimed American photographer. It will include more than 300 photographs taken by the artist as he traveled around the country between 1972 and 1973. The works can be seen as a visual diary, recounting the path of someone passing through the world, recording nearly everything he sees and does, and the people he encounters along the way. This exhibition is on view from October 23, 2005 through January 23, 2006.

American Surfaces is a photographic version of a road movie, and in that tradition it has at times a downbeat mood, its director/protagonist often drawn to the bleak and the mundane. Frequently, nothing seems to be happening, or something wholly unremarkable has been recorded. And yet there is tremendous beauty here â€” beauty found where itâ€™s least expected â€” as well as humor and pathos. American Surfaces is a meditation â€” on what it means to be in the world, on what it means to point a camera in one direction rather than another â€” and no matter what is being recorded its subject is always photography itself.

Like any road movie, there is a potentially endless cast of characters. The man behind the counter in the pawn shop in Farmington, New Mexico, who may well have stood there every day for the past forty years. The boys at the gas station in Selma, Alabama: one younger, white and blond, looking directly towards the camera; the other, older and black, eyes cast down. A photograph of a drifter in the bus station in Oklahoma City, Oklahoma is considered by some to be one of the most moving portraits in all of 1970s color photography. These are real people living their lives in a place and time that was already in a sense passing. Here, then, is American Surfacesâ€™ larger sociological subject. The urban and commercial sprawl of the mid-to-late 1970s/early 1980s, which paralleled the rise of the tourist economy, would threaten to envelop America in a dulling sameness, depriving much of the country of its distinct character and its people their sense of place. This is, in part, what Shore hoped to, and did, capture.

Alongside William Eggleston, Shore is one of the central figures in 1970s color photography, an artist who built upon some of the best of those itinerant, restless photographers who came before him â€“ from Walker Evans to Robert Frank and Garry Winogrand. Shore is also a pioneer who would exert considerable influence on younger photographers in the 1980s and 1990s, including such well-known artists as Andreas Gursky and Thomas Struth.

This exhibition is curated by P.S.1 Curatorial Adviser Bob Nickas. A fully illustrated book, American Surfaces, will be published by Phaidon in the fall, with an introduction by Nickas.