One of the most important collections of Pop Art on the international scene will be on show again in Cologne. After a long break the Ludwig Museum will be exhibiting its Pop icons in a new presentation. In the collection, works by Tom Wesselmann, Jim Dine, David Hockney, Andy Warhol, Claes Oldenburg and many others. 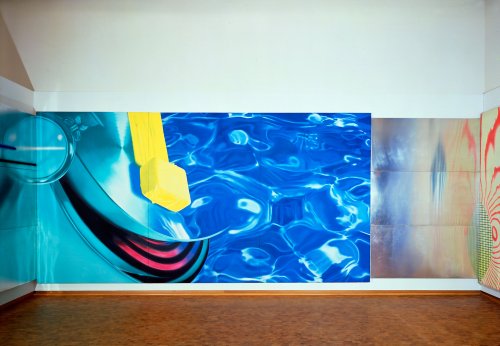 Masterpieces from the Ludwig Museum's collection of Pop Art

One of the most important collections of Pop Art on the international scene will be on show again in Cologne from October 29th. After a long break the Ludwig Museum will be exhibiting its Pop icons in a new presentation.

Many of these works have been on loan for a high-quality exhibition at Aarhus in Denmark, and the Cologne museum wishes to celebrate their return appropriately.

The Ludwig Museum's Pop Art collection includes pivotal objects and groups of works by trail-blazing representatives of this genre in America and Europe plus key creations by the two forerunners of this movement: Jasper Johns and Robert Rauschenberg.

Important achievements by Andy Warhol investigate serial production and the mass media, while Claes Oldenburg plays with clichÃ©s from the everyday environment, manipulating their material nature and magnitude.

James Rosenquist's origins as a billboard painter are apparent in masterly transpositions of familiar elements onto canvas, and Roy Lichtenstein's reworkings of comic strips, apparently limited to enlargement, are in fact based on a subtle visual aesthetic.

Artists such as Tom Wesselmann and Jim Dine, David Hockney, Richard Hamilton, and others enlarge this spectrum with their own reorderings of everyday reality. Thematically diverse large-scale installations and environments establish emphases.

They include Edward Kienholz's provocatively critical 'Portable War Memorial', James Rosenquist's powerful room-size painting 'Horse Blinders' as a metaphor of the daily deluge of images, and Claes Oldenburg's 'Street' in homage to Jean Dubuffet. Even Oldenburg's legendary 'Mouse Museum' has been re-erected for this presentation (thanks to the Museum of Modern Art / Ludwig Foundation Vienna) as a 'museum within the museum', exerting its playful wit and charm.

Selected works representing Hyperrealism, such as John de Andrea's 'Studio Scene', display this way of dealing with daily reality. This assemblage of Pop Art originated in purchases by Peter and Irene Ludwig whose eye for quality and far-sightedness led to establishment one of the world's most important collections of such works as early as the Sixties. When many of these creations were shown for the first time in 1969 at what was then Cologne's Wallraf-Richartz Museum (out of which the Ludwig Museum emerged in 1976 as an autonomous institution devoted to twentieth century art), that was a sensation.

The Ludwig Museum has built up its stock on the basis of those works and ongoing purchases so as to offer a full spectrum of Pop Art and mediate its close links with Fluxus and the Nouveaux RÃ©alistes. Now work by John Wesley, William Copley, Patrick Caulfield, and Ed Ruscha, who were originally not in the Ludwig collection, can be seen in this overall context.

For 'Lobby' (1988) Richard Hamilton used computer technology to integrate his oil painting (based on an old postcard) of the foyer in Berlin's Hotel Eden in a three-dimensional sheath enclosing the same space. The Ludwig Museum intends to buy this creation, thereby extending its renewed presentation of Pop Art up to the present day in conjunction with other works from the Seventies to the Nineties.

The central questions in Pop Art are taken up again here in a variety of ways, are revised, confirmed, or completely reformulated. Fresh application of photography and film in Pop Art accelerated dissolution of the established delimitations of this genre. A number of exemplications, presented as DVD copies, are intended to show the importance of film for such artists as Andy Warhol or Ed Ruscha.

Their ongoing influence is demonstrated in Douglas Gordan's video 'Bootleg' which refers to Warhol's film 'Empire'. The next generation of artists, including Dan Graham and Robert Smithson, was not satisfied with merely calling genres into question; their challenge was directed towards the museum as an institution. Even if today's artists are glad to return to the museum with their works, the ephemeral projects of the Seventies are still of significance for contemporary art.