Best known for his insider look at the snowboarding, skateboarding and hip-hop cultures, Ari Marcopoulos' photographs reflect a casual, self-taught aesthetic. Day Labor: the artists explore the ways in which cultural identity and bodily perception are driven and socially conditioned by the global economy and the media. Referencing issues relevant to contemporary society, Jon Kessler's work thrusts the viewer directly into a complex visual experience. Woman of Many Faces: the actress Isabelle Huppert receives a homage through over 100 photographic and video portraits by a multi-generational group of artists and fashion photographers. 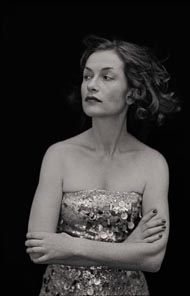 P.S.1 Contemporary Art Center is pleased to present a new body of work by California-based photographer Ari Marcopoulos. Best known for his anthropological, insider look at the snowboarding, skateboarding and hip-hop cultures, Marcopoulosâ€™ photographs reflect a casual, self-taught aesthetic. This exhibition is on view from October 30, 2005 through January 23, 2006.

An opportunity for insight into a more private aspect of the artistâ€™s life, the 20 color photographs shown at P.S.1 might seem a deliberate departure from Marcopoulosâ€™ previous work. But whether tracking the nomadic packs of professional snowboarders, or the Beastie Boys on tour, Marcopoulos has always been drawn to the spontaneous and genuine dynamic of alternative incarnations of family. For the first time he explores what it means to be a member of his own domestic tribe.

Both the natural landscapes and the family portraits are marked by an innate stillness and isolation. Lush colors and textures of his often imposing landscapes are reflected in portraits of his two young sons, who are represented in images that express the universal challenges of growing up. Though such a concentration on his domestic life may seem contradictory to his reputation as a denizen of the worlds of music and extreme sports, it becomes evident that these photographs celebrate his ability to synthesize and document the quotidian with the wide appeal of music and sport subcultures. While the moments that Marcopoulos captures are undeniably personal, a signature aesthetic objectivity prevails. Marcopoulos attempts to locate an element of â€œothernessâ€ in the everyday, thereby creating a certain level of detachment in such intimate imagery.

These interior and exterior glimpses Marcopoulosâ€™ home life in the bucolic surrounds of Northern California reveal a maturing and ultimately affecting view of the artist.

Ari Marcopoulos was born in Amsterdam, the Netherlands in 1957. He currently works and lives in Sonoma, CA. His work has been published in The New York Times Magazine, Interview, Paper, Blind Spot, Transworld Snowboarding and Snowboarder. Films include the documentary Larry Wright; a longform video for Beastie Boys; and Key to the Riddle, a documentary on Forrest Bess. Marcopoulosâ€™ photographs have been acquired by the Whitney Museum of American Art in New York and SFMOMA. Books include Out and About, 2005; Kids Born out of Fire, 2004; Pass the Mic: Beastie Boys 1991-1996, 2001; and Transitions and Exits, 2000.

This exhibition is curated by Alanna Heiss. In conjunction with the exhibition, JRP-Ringier will publish a book featuring an essay by Matsui Midori.

P.S.1 Contemporary Art Center is pleased to present Day Labor, a group exhibition featuring works by eighteen international artists, from Croatia, France, Germany, Israel, Mexico, Turkey, the Netherlands and the United States. Using various media, including photography and video, the artists explore the ways in which cultural identity and bodily perception are driven and socially conditioned by the global economy and the media. Day Labor is on view from October 30, 2005 through January 9, 2006.

The exhibition examines societyâ€™s obsession with the notion of â€œbecoming,â€ as well as the libidinal or visceral aspects of the labor trade. From day laborer to pop star, from paramilitary leader to corporate giant, the global economy is continually churning out labels, brands and archetypes. Many of the artists in Day Labor challenge these social constructs by inserting themselves into the public domain. Some recreate situations in the workforce as a means to comment on the brutality, inequity and the absurdity of the marketplace. In revealing the various aspects of the labor trade and the attendant values placed on race, gender, class, and body type, Day Labor will examine market values and economic barometers, immigration, global tourism, corporate culture and high culture status.

P.S.1 Contemporary Art Center presents The Palace at 4 A.M., a new site-specific installation by New York-based artist Jon Kessler. Created for P.S.1, this exhibition vastly expands upon a recent suite of works by the artist entitled Global Village Idiot, which opened to critical acclaim in the spring of 2004. The installation at P.S.1 is the largest and most complex Kessler has ever completed, and is his first solo museum appearance in New York. The Palace at 4 A.M. is on view from October 30, 2005 through February 6, 2006.

Referencing issues relevant to contemporary society â€“ including politics, war, advertising, propaganda and surveillance â€“ Kesslerâ€™s work thrusts the viewer directly into a complex visual experience. Though sources of inspiration and information are varied and include reality television such as â€œThe Swan,â€ kabuki, and Apocalypse Now, The Palace at 4 A.M. ultimately speaks to the history of image production and representations of warfare.

The exhibition explores our societyâ€™s alienation from the real (demonstrated most recently by â€œOver There,â€ a new television drama chronicling the war in Iraq as it continues to rage). The intention is for the viewer to experience the piece as if she is putting her head inside a television that is in the process of being channel surfed. According to Kessler, â€œMy aim is to create a kind of visual journalism of the past four years, where underneath this abundance of stimuli, what takes place is an investigation into how the images that occupy our realities and dreams are constructed and manipulated.â€

Based on the dual notion of deconstruction and reconstruction, this conflict and relationship is immediately apparent in The Palace at 4 A.M.â€™s intricate infrastructure. Based in one large gallery with adjoining exhibition spaces around the periphery, Kesslerâ€™s work is comprised of a network of kinetic sculptures, each of which incorporate surveillance cameras acting in tandem with the sculpturesâ€™ movements to create video imagery occurring in real time. In the center of the main gallery â€“ or central nerve bank â€“ is what the artist coins a â€œtermite moundâ€ of imagery. Actions and images created live in peripheral areas (as well as in the main space itself) are simultaneously displayed on monitors and screens in the central nerve. This information is constantly assembled and reassembled, resulting in scenes that appear unfamiliar, disorienting and sometimes dangerous.

All of the apparatuses used for The Palace at 4 A.M. are in plain view. Thus, the wires, gears, cameras, motors, etc. constitute the body of the work itself, creating yet another dual relationship. Though Kessler demystifies the physical structure, it also serves to further mystify his manipulations; viewers must trust themselves to ponder the power of each image despite that fact that everything is visible to the eye.

Since 1983, Jon Kessler has exhibited widely in galleries and museums through the United States, Europe and Japan. A retrospective of his work, Jon Kesslerâ€™s Asia, was mounted at the Kestner-Gesselshaft in Hannover, Germany, and traveled to Graz, Austria. His work has been collected by numerous institutions including The Museum of Modern Art, The Whitney Museum of American Art, the Walker Art Center, and both the Chicago and Los Angeles MOCAs. From 2000 to 2005 he served as Chair of the Visual Arts Division of Columbia Universityâ€™s School of the Arts. Kessler was born in 1957 in Yonkers, New York.

The Palace at 4 A.M. is curated by P.S.1 Director Alanna Heiss.

The renowned French actress Isabelle Huppert receives a complete homage through over 100 photographic and video portraits by a multi-generational, international group of legendary artists and fashion photographers, including Henri Cartier-Bresson (1908-2004, France) Nan Goldin (b.1953, New York), Hiroshi Sugimoto (b.1948, Tokyo), Roni Horn (b. 1955, New York) and Helmut Newton (1920-2004, Germany). Her dynamic, challenging, and powerful roles are reflected in this diverse collection of portraits which celebrate her inspiring performances and prolific, thirty year career in which she has worked with eminent directors Jean-Luc Godard, Claude Chabrol, Bertand Blier, and many others. This exhibition will be shown in conjunction with a screening of Huppertâ€™s films at MoMA; a catalogue accompanying the exhibition includes written portraits by Susan Sontag and Elfriede Jelinek. Woman of Many Faces: Isabelle Huppert will travel internationally to over six major institutions.