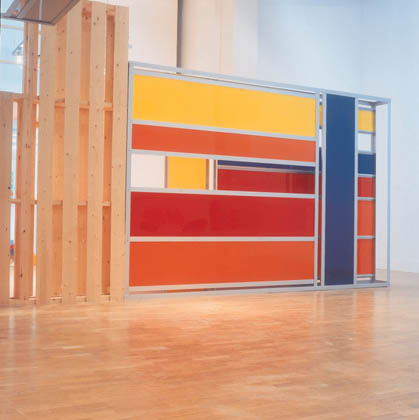 A private collection is a peculiar element within arts, because art works acquire their value through the glance of the one who had collected them. Each year, the Centre d'art de l'Ã®le de VassiviÃ¨re will present a masterpiece that is part of an important private collection, something rarely proposed to the public.

Marc and JosÃ©e Gensollen, a couple of psychiatrists, are authors of one of the most important contemporary art collection in Europe. The collection is constituted around the notion of doubt, which crosses, at the same time, the work of Bruce Nauman, Dan Graham, Lawrence Weiner or Carsten HÃ¶ller.

Without the need of being transported, the projects exhibited in the show are created for the Island of VassiviÃ¨re: from the concept to its setting up for an exhibition "telerange".

The exhibition Strictly confidential has been created in partnership with Naturalia

The park of sculptures is free and open all year round. It has been developed over the years since the very first artistic project took place on the island. French and international artists are invited regularly to produce and place a work in the park: Andy Goldsworthy, Olivier Mosset, Ilya and Emilia Kabakov, Michelangelo Pistoletto, Adel Abdessemed...

Open every day from 11 am to 7 pm until the 16th October / After from 2 pm to 6 pm
Admission: full ticket: 3 euros/reduced ticket: 1,5 euros over 12 years, students, unemployed/free: under 12 years, disabled and their companions, Friends of the Centre international d'art et du paysage, members of the ArtothÃ¨que.