The Beetle Trilogy and Other Works 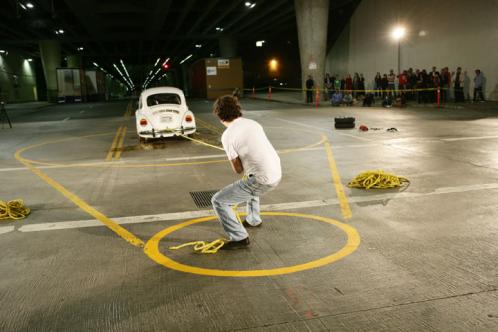 Damian Ortega: The Beetle Trilogy and Other Works is comprised of the three episodes of The Beetle Trilogy as well as a new site-specific work commissioned by REDCAT that expands on the artistâ€™s fascination with conceptual practice, social organization, and humor. Initiated by REDCAT in collaboration with The Museum of Contemporary Art, Los Angeles (MOCA), this ambitious exhibition features concurrent installations of the artistâ€™s works at two downtown contemporary art venues.

MOCA will present Cosmic Thing (2002), the first episode of The Beetle Trilogy, featured in the 2003 Venice Biennale. The work, a suspended 1989 Volkswagen Beetle is part of MOCAâ€™s permanent collection, and this will be its Los Angeles debut. The exploded/expanded car recalls a brochure for mechanical parts or a dissected insect realized in three dimensions. MOCA associate curator Alma Ruiz will organize this part of the presentation, which will be on view at MOCA Grand Avenue.

The second and third components of the trilogy have been produced as part of the artistâ€™s residency at REDCAT. Moby Dick, the second episode, is an action/performance that takes place in the street on Lower Grand Avenue, a kind of accidental amphitheater emerging from the road that connects the loading docks of REDCAT and MOCA. Ortegaâ€™s late night action is a physical struggle between artist and machine, a tug-of-war in which the artist attempts to control the movements of a white Volkswagen Beetle with a series of ropes and pulleys. The struggle references mythologies of man versus nature, the prodigal son, and related narratives of the heroic in the context of a contemporary urban hunt. The action includes live musicians performing Led Zeppelinâ€™s Moby Dick with John Bonhamâ€™s legendary drum solo as an accompaniment and aural text. This episode reveals a historical continuum in Ortegaâ€™s vision of contemporary mythology, the quest for cosmic identity, and how this manifests in human cultural expression.

Escarabajo is the third episode of the trilogy. In it the artist returns the car to its possible place of birth in Puebla, Mexico, home of the North American Volkswagen factoryâ€”the last site of production for the original Beetle. From Mexico City to Los Angeles and back to Puebla, the vehicle travels a mythic journey of exploration and return. Somewhere along the road in Puebla, the car expires and is laid to rest; buried on its back, like a dead bug. This last action completes the â€œepic journeyâ€ of the return of the prodigal son; the homecoming of the hero to his place of origin or the end of a life cycle.

The exhibition at REDCAT will feature six new works in sculpture and video including a 16mm film installation of the Moby Dick and an 8mm film of the Escarabajo actions, tying the trilogy together in an investigation of icons of modern society, narratives of heroism, and the (dis)function of mechanical systems. A fully illustrated, bilingual catalogue will accompany the exhibition and will include contributions by novelist Hari Kunzru, MOCA Associate Curator Alma Ruiz, Gallery at REDCAT Director and Curator Eungie Joo, and the artist. The publication will be available in January at REDCAT, redcat.org or through D.A.P./Distributed Art Publishers.

Damian Ortega: The Beetle Trilogy and Other Works is a collaboration with The Museum of Contemporary Art, Los Angeles. REDCAT's exhibition and publication are made possible by the generous support of La Colección Jumex. Additional support is provided by The Andy Warhol Foundation for the Visual Arts, kurimanzutto, White Cube, and CONACULTA. MOCA's presentation is made possible by the Jumex Fund for Contemporary Latin American Art and Mandy and Clifford J. Einstein.