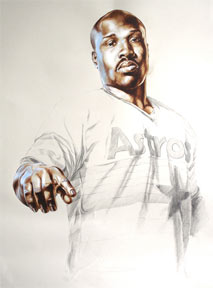 NeoVernacular is curated by Franklin Sirmans and features new works by six artists: Yun Bai, Matthew Hollis, Shinique Smith, Jeff Sonhouse, Mickalene Thomas and Kehinde Wiley. In addition to sharing their connection to vernacular art forms, all are based outside Los Angeles and except for Kehinde Wiley, all of them are exhibiting in Los Angeles for the first time.

A graffiti writer, Shinique SmithÂ¹s artworks display the hallmarks of street graffiti: visual verve, tenacity and the quickened creativity of something painted in a furtive hurry. SmithÂ¹s cut paper sculptures add a third dimension to what is normally painted directly on walls and in other sculptural work, Smith uses cast-off clothing in the same way that the street artist uses spray paint, tagging empty space with gestural forms.

The Renaissance paintings of Titian and Tiepolo provide the art historical framework for the work of Kehinde Wiley, although Wiley's works feature subjects posed in a hardcore B-boy stance. While Wiley's work has obvious references to a long tradition in the history of western visual art, his work also incorporates the vernacular tradition of urban portraiture, more specifically, those of Hip Hop heroes and heroines.

Mickalene Thomas looks to vintage and contemporary popular media images of women--Jet magazine's 'Beauty of the Week', wrestling girls and 60s and 70s pin-ups--as source material for her paintings. While also inspired by MatisseÂ¹s nudes, Thomas adds a bit of bling to hers through the application of colored Swarovski rhinestones. ThomasÂ¹ partially clothed heroines are quasi self-portraits that contrast her likeness with the often clichÂ¹d images of women portrayed by the media.

Jeff Sonhouse finds inspiration from such disparate sources as W. E. B. DuBois, Paul Laurence Dunbar, Ralph Ellison and Tupac Shakur. His portraits of masked figures allude to classical and modern portraiture while raising questions about African American male identity. SonhouseÂ¹s work in NeoVernacular depicts Cardinal Arinze, the black cardinal from Nigeria who made the news when he was rumored to be a candidate for the Papacy. He would have been the first black Pope, and would have received worldwide media attention, but now, with no media coverage, he has returned to his life as an invisible man. In this portrait, for the first time, Sonhouse has dispensed with the mask, making the invisible man visible.

Matthew Hollis' fascination with pulp and film noir has led him to create some highly disturbing photographs, often featuring himself as photographer and actor in his eerie narrative-driven pictures. His panoramic silver-gelatin photographs pay homage to the work of 1940s filmmakers and also refer to the literature of Raymond Chandler. Dark and shadowy, the photographs mine a psychological terrain where race and gender play an intriguing role.

Born in New York City, Franklin Sirmans received a B.A. in Art History and English from Wesleyan University in 1991. Based in New York, he works as an independent curator, writer, editor and instructor. He is co-curator of Basquiat presented at the Brooklyn Museum, Los Angeles Museum of Contemporary Art and the Museum of Fine Arts, Houston (2005-2006). He was co-curator of Make It Now: New Sculpture in New York at Sculpture Center (2005); Ralph Bunche: Diplomat for Peace and Justice at the Queens Museum of Art (2004); and One Planet Under A Groove: Contemporary Art and Hip Hop held at the Bronx Museum of Art, Spelman College Art Gallery, Atlanta, the Walker Art Center, Minneapolis and Villa Stuck, Munich (2001-2003).