Roni Horn: recent sculpture, drawings, photographs, and an artist's book. The central photographic work will be a new series entitled Portrait of an Image, for which the artist has taken over 100 photographs of the famed actress Isabelle Huppert. Horn are exhibiting 2 large glass sculptures as well, and a group of new large-scale pigment drawings. Rebecca Warren: Pas de Deux, figurative sculptures in unfired clay, expressionstic and often overtly sexual. Terry Winters: Notes for Color Coding, 6 paintings and a suite of 9 monoprints, all made in the last year. 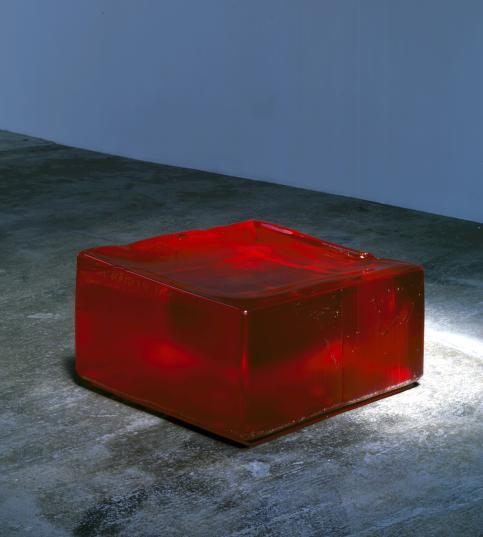 Matthew Marks is pleased to announce an exhibition of new work by Roni Horn, the next exhibition in his gallery at 522 West 22nd Street. This will be the artistâ€™s first exhibition in New York since her exhibition at the Dia Center for the Arts in 2001.

The exhibition will include recent sculpture, drawings, photographs, and an artistâ€™s book.

The central photographic work will be a new series entitled Portrait of an Image (with Isabelle Huppert), for which the artist has taken over 100 photographs of the famed French actress. In this work, Horn asked Huppert to assume the roles of eight different characters she has played over the course of her career: Beatrice from The Lacemaker, Erica from The Piano Teacher, Emma from Madame Bovary, Marie from Story of Women, Mika from Merci pour le Chocolat, Jeanne from La CÃ©rÃ©monie, and Dominique from School of Flesh. These close-up portraits will be installed in a row, forming an intermittent horizon throughout the gallery spaces.

Roni Horn will be exhibiting two large glass sculptures as well. One, Untitled (Aretha), which takes its name from the singer Aretha Franklin, is a rough, rectangular block of solid glass in a deep red color. The other, Untitled (for Titan - the Moon), is the largest glass piece the artist has made to date, a honey-colored solid glass cylinder measuring seven feet in diameter and eighteen inches high.

The artist will also show a group of new large-scale pigment drawings from a series entitled Enough. Each of the drawings, made with red pigment, measures approximately six by eight feet. Roni Hornâ€™s unique approach to drawing involves making numerous preliminary drawings on smaller sheets and then cutting up those sheets into fragments. These fragments are then arranged and laid down on a larger sheet that serves as the ground for the final drawing.

The recently published artist's book, Index Cixous, will also be incorporated into the exhibition. For this project, the artist photographed literary and cultural theorist HÃ©lÃ¨ne Cixous over several sittings.

Roni Horn began exhibiting her work in the early 1980s. Her work has been the subject of numerous one-person museum exhibitions, including, most recently, Some Thames at the Art Institute of Chicago at the end of 2004.

Matthew Marks is pleased to announce Rebecca Warren: Pas de Deux, the next exhibition in his gallery at 523 West 24th Street. This will be the British artistâ€™s first one-person exhibition in New York.

Rebecca Warren makes figurative sculptures in unfired clay. These sculptures are expressionstic and often overtly sexual. In the present work, Warren takes as inspiration the art historically-loaded figure of Degasâ€™s sculpture of the little dancer. Exploring the duality between the prostitute and the ballerina, Warren interrogates the way that canonical sculpture has been read and reread over time. The artistâ€™s work has been called feminist, but Warren tends to disagree: â€œI want them to look like they'd been made by a sort of pervy, middle-aged provincial art teacher whoâ€™d taken me over.â€

The artist will be exhibiting over a dozen new sculptures, including nine figures, loosely termed â€œdancers.â€ The pas de deux referenced in the title is the dynamic, fluctuating relationship between art historyâ€™s most persistent binaries: male/female, high/low, old/new, Dionysus/Apollo, classic/grotesque. This exhibition scrutinizes these traditional sets of opposing forces and explores the way in which they interact and gain meaning from each other.

The artist writes, â€œThe title of the exhibition suggests that all these dualities are in flux, moving around each other. The use of French alludes to the hegemony of Classical Western-European High Culture while its representation in the exhibition suggests dissolution and degeneracy. Bits of the sculptures grow exuberantly, misunderstanding their own limits and getting it wrong, becoming distorted, deformed, cartooned.â€

On the walls will be several vitrines holding a collection of found objects, studio detritus, neon fragments and sculptural doodles. These cases act as would-be ethnological displays providing an imagined museological context while at the same time serving as three-dimensional sketchbooks.

Rebecca Warren was born in London in 1965 and received degrees from Goldsmithâ€™s College at the University of London and the Chelsea College of Art, London. She first began exhibiting in 1993, and her work was the subject of a one-person exhibition at the Kunsthalle ZÃ¼rich in 2004. The artist currently lives and works in London.

Matthew Marks is pleased to announce the exhibition Notes for Color Coding:
Paintings and Monoprints by Terry Winters. This exhibition will be on view at 521 West 21st Street and will also inaugurate the galleryâ€™s newest space, at 526 West 22nd Street.

The exhibition will include six paintings and a suite of nine monoprints, all made in the last year.

For the paintings, Winters has maintained the familiar ratio of standard notebook paper but enlarged the size, making pictures that are nearly five feet tall and painted with bright, saturated pigment. The artist has also introduced a new formal theme to these paintings: on each canvas one can find coiled knot-like forms that, rendered in beautiful, rich colors, take on a floral, sculptural resonance, much like rosettes in architectural bas-relief.

To produce the monoprints, Winters first made nine different laser-cut blocks. He then inked each block in a unique fashion, exploring different color combinations.