Apparatus. The exhibition consists in a series of 40 photographs depict the areas of the city that have been devastated by the segregation resulting from ongoing sectarian violence. The abandoned houses and streets, fences and blocked roads are both the consequence of and the means by which an uneasy peace is maintained. The show even present a related video installation. 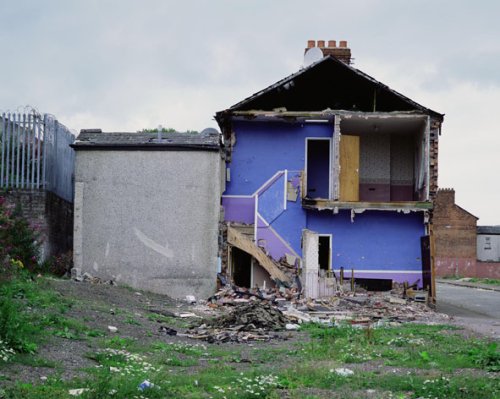 GalerÃ­a Pepe Cobo is pleased to announce the opening of APPARATUS, an exhibition of new works by Willie Doherty. The exhibition consists of a series of forty photographs and a related video installation.

The series of photographs entitled APPARATUS was made in Belfast over the last year. The photographs depict the areas of the city that have been devastated by the ghettoisation and segregation resulting from ongoing sectarian violence. The abandoned houses and streets, fences and blocked roads are both the consequence of and the means by which an uneasy peace is maintained.

At first glance, the photographs appear to adopt a documentary mode. However the images shift between representation and abstraction, panoramic and close-up, as Doherty allows us to see something of the ugliness and poverty of social and economic deprivation and to relish the aesthetic pleasure of the detail and texture of a painted wall or a paint splattered security fence.

This feeling of unease is also present in the video installation Closure, where a woman appears to be trapped within a walled compound. This place echoes some of the architecture visible within the photographs but again moves the concern beyond the documentary. The work oscillates between the real and the imaginary. The woman is dressed plainly in a black coat and defiantly paces the interior of the walled space. She appears to be trapped but looks beyond her immediate confines.

The video of this enigmatic figure is accompanied by a voiceover that describes the breakdown of the fabric of a house but also reaffirms her defiance and commitment to an unspecified cause. Her movement and presence are transformed into an act of resistance. Closure moves beyond any definition of her character as victim and seeks to problematise and redefine the conventional depiction of the female within a socially and politically charged context.

The artist will be present.