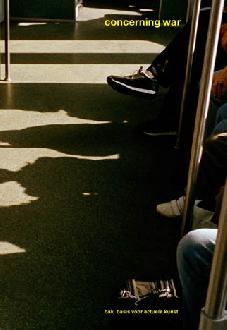 Concerning War is a project with a multi-faceted format including an exhibition Soft Target. War as a Daily, First-Hand Reality, a series of weekly lectures, conversations, screenings, and performances called Undercurrents, as well as a publication that consider how the issue of war is reflected upon in contemporary artistic practice. Concerning War focuses on the current situation of a permanent state of conflict across the globe. Concerning War addresses violent incidents in the world not as isolated events but as a new condition of an ongoing, unparalleled warfare.

The exhibition entitled Soft Target. War as Daily, First-Hand Reality presents a collection of works by over twenty international artists and filmmakers. While addressing different concepts of war, Soft Targetâ€¦ begins with the question of whether art can provide a probing, radical impression of war as a daily, first-hand reality. Whereas the media fall short of addressing this issue, various artistic positions in the exhibition speculate upon the capacity of images to convey the reality of war, as well as about ethics of any such attempt. The exhibition is curated by Brigitte van der Sande.

Undercurrents is a series of weekly talks with artists, curators, and theorists on subjects that touch upon the underlying forces behind the current state of warfare, including how we define â€œwar,â€ the impact of the media and its manipulations, and what role critical artistic and intellectual practices may play in addressing these issues. Through presentations, lectures, conversations, screenings, and performances, the participants in Undercurrents discuss issues such as fear, the rhetoric of war, agonistic democracy, and notions of the enemy, security, and biopower from the perspective of their own critical practices. Undercurrents is curated by Danila Cahen, Binna Choi, and Maria Hlavajova.

The activities of BAK, basis voor actuele kunst have been made possible by financial support from: Ministry of Education, Culture and Science, City Council of Utrecht, and the Province of Utrecht.