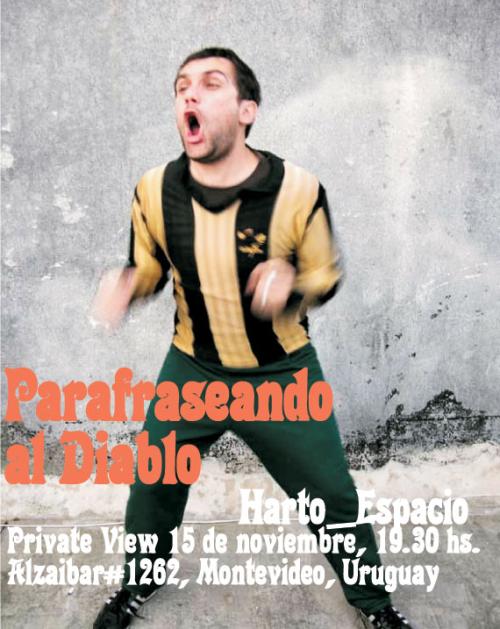 Parafraseando al diablo is a contemporary art exhibition including 11 projects by international artists. It is the third exhibition produced by harto___espacio, an autonomous and non-profit organization that develop contemporary art exhibitions using empty or unused buildings in Montevideo (Uruguay). Parafraseando al diablo emerged from an Internet dialogue between two artists, Alejandro Vidal (Spain, 1972) and Antar Kuri (Mexico, 1974). Departing from an initial keyword list the participating artists developed their proposals as a set of instructions that were later on negotiated and adapted to MontevideoÂ´s reality.

Negotiation with reality is largely determined by the opportunities of adaptation to such certainty. A reality that sometimes presents itself as negative and hostile. The artists in this exhibition take an evident social, politic or reactive commitment. Some have done it before, some are doing it for the very first time, but all of them act as mediators between this evil force and the public, manifesting the wicked intentions that may lie in every discourse or given reality.

Ranging from pirate material destruction to the archetypical violent â€œbarra bravaâ€, from the urban guerrilla or stencil, to the liberation of oppressed animals, Parafraseando al diablo shows the symptoms of a disease.