The show offers the first presentation of the classical highlights of light art, and here, the most recent contemporary art reveals surprising references to earlier works. Through extensive room installations, new presentations and reconstructions of historically significant light objects and environments, the exhibition demonstrates how, in the second half of the XX century, especially in the 1960s, the medium of light inspired a growing interest in numerous European artists groups and how these artists dealt with light, color, and movement. 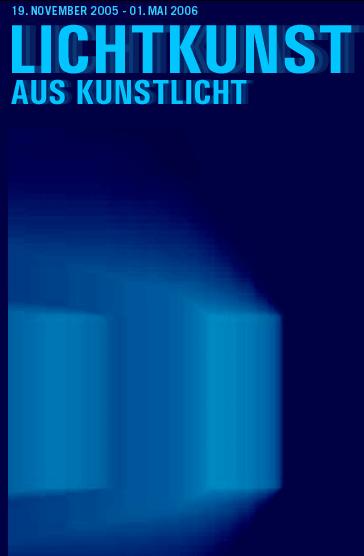 The visible world and the world of sight, as is well known, is the world of light. Art as the field of the visible - as painting shows - has always been bound to the universe of light. Albert Einstein solved the mystery of light's essence in 1905 through wave-particle duality. Light is both an electromagnetic wave and a current of particles. It is a form of energy that in a vacuum would travel at a speed of 299,792,458 meters per second. When light hits a prismatic structure it divides into different wavelengths that are visible as colors. Its brightness is measured in lux and lumen describes the stream of light, or the amount of light that is emitted from a source of light.

Painting has concentrated primarily on the depiction of natural light and the wave phenomena that are known from optics and other areas. It is only since Heinrich Hertz discovered in 1889 in Karlsruhe, "that electric waves reproduce exactly like optical waves" [Max Planck, 1894] and have the same speed, i.e., that there is a real and symbolic relationship between light and electricity, that a universe of artificial light has had its influence on all of us.

Very few media have revolutionized and democratized our living space in the last hundred years as much as electrical light has. The most diverse areas of everyday life, of working life, consumption, media, etc., have transformed through artificial light - and so has art. Since the beginning of the last century, artificial light has increasingly illuminated ever more streets, shop windows, billboard signs and houses in an unprecedented abundance and form. We reside in cities and gardens of light. Observed from airplanes and satellites, the nighttime Earth glows like a cluster of stars. Light works become artificial stars that change the visible world and change people's lives as a whole. Ever since the victory over the night and the sun, we have lived in paradises of artificial light.

For nearly a hundred years, artists have confronted this immaterial medium in the form of light bulbs, luminous substances and neon tubes, glowing LEDs and powerful floodlights. Art has increasingly turned from the illusionary representation of natural light to the real application of artificial light. The artwork is transforming itself from a representative screen depicting the wave phenomena of natural light - the prismatic decomposition into rainbow colors - into a real sender of electrons and photons of artificial light. Artists create autonomous, luminous objects and rooms, and even illuminate entire landscapes.

The electrification of the world inspired artists of different genres such as Futurism, Constructivism, Kinetic Color Music and the Bauhaus. Through art directions such as material painting, film, Kinetics, and Op Art, immaterial artificial light created an independent medium: light art. Light art pioneers such as LÃ¡szlÃ³ Moholy-Nagy, Thomas Wilfred, and Zdenek PesÃ¡nek illustrate the great elementary attraction this medium has for artists. At the same time, this can be seen in the 1920s avant-garde films by Hans Richter, Walter Ruttmann, Viking Eggeling, and Oskar Fischinger.

Through extensive room installations, new presentations and reconstructions of historically significant light objects, installations and environments, the exhibition demonstrates how, in the second half of the twentieth century, especially in the 1960s, the medium of light inspired a growing interest in numerous European artists groups and how these artists dealt with light, color, and movement. Excellent work groups such as ZERO [Germany], GRAV [France], and Gruppo T and Gruppo N [Italy] document the beginning of immersive and interactive, even virtual environments. Many artists hereby implement light not just statically, but also tie it with kinetic elements. It is possible to view fascinating works in this context by the artists Nicolas SchÃ¶ffer, Jean Tinguely, and Gerhard von Graevenitz. The ZKM|Museum for Contemporary Art's spectacular exhibition offers the first presentation of the classical highlights of light art, and here, the most recent contemporary art reveals surprising references to earlier works. Early positions of prominent artists such as Dan Flavin, Bruce Nauman, Keith Sonnier, James Turrell, Mario Merz, FranÃ§ois Morellet, Ferdinand Kriwet, and Maurizio Nannucci elucidate the use and importance of artificial light in Concept Art, Op Art, Arte Povera, etc.

Current productions substantiate the shimmering spectrum of the multifarious confrontations with artificial light. The works of Heimo Zobernig, Sylvie Fleury, Jenny Holzer, and Cerith Wyn Evans, along with Jorge Pardo, Tobias Rehberger, Steven Pippin, and Olafur Eliasson reveal the aestheticizing of conceptual issues dealing with the fields of problems and perception of immaterial light. Whether aesthetic, provocative, rife with allusions, or extremely minimal, private or public, in the complex fields of light references between avant-garde and pop, the fascination of the medium is richly and colorfully illuminated through the works of Tracey Emin, Martin Boyce, Hermann Pitz, Mischa Kuball, Tatsuo Miyajima, and Mike Kelley. The latest contributions and technologies, the postmodern play on forms and content, represented by Berta Fischer, Benita Liebel, Anselm Reyle, Simon Dybbroe MÃ¸ller, BjÃ¶rn Dahlem, as well as Jason Rhoades and Zaha Hadid, fascinate with profound light spheres, ironic references, and filigreed light plays. A true fireworks of the impressively broad and beautiful spectrum of light art created from artificial light unfolds in the ZKM|Museum for Contemporary Art.

The exhibition leaves the context of the museum to unfold its aura at night, too, and to enable further points of reference to the theme. On the outer grounds of ZKM are site-specific light objects, sculptures, and installations that beam into and have an affect on the city space.

With the exhibition "Light Art from Artificial Light", ZKM|Museum for Contemporary Art has expanded its cooperation with influential, internationally renowned collections. The proven collaboration with private collections Boros, FER, Froehlich, GrÃ¤sslin and Weishaupt will be sensibly complemented by the addition of generous loans from T-B A21 [Thyssen-Bornemisza Art Contemporary, Vienna], Landesbank Baden-WÃ¼rttemberg, the foundation VAF, Frankfurt/M. - Rovereto, and other associated private lenders.

Accompanying the exhibition is a comprehensive catalogue of approx. 400 pages with illustrations of the exhibited works. The essays discuss the exhibits and also illuminate the phenomenon of light from a scientific, philosophical, and art-historical perspective. Additional texts from individual light artists provide a view of the medium of light in art.