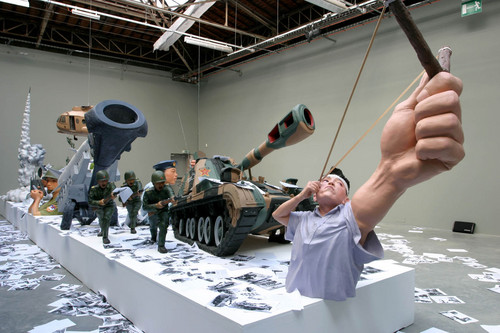 Yerba Buena Center for the Arts is pleased to present recent work by Paris-based artist Wang Du, in his first American solo exhibition. In the spirit of the Center's current Future Shock theme, which investigates the response by artists grappling with the developments of a modern world and the power of the media, Wang's large-scale sculptures interrogate the disorienting effects of global mass media—a reality-bending machine that reduces significant events to sound bytes and turns trivial matter into a deluge of information garbage.

Wang refers to his monumental sculptures and installations as "three dimensional images." Wang's subjects are cropped just as glossy graphic imagery and front-page photos are cut off by their frames. Pieces faithfully simulate the exaggerated one-point perspective found in pictures and are then blown up to massive scale. Wang Du's art takes the events, images and messages of our media-saturated era and turns them into visually overwhelming sculptures, capturing the immense impact they have on our experience of the world.

"Wang Du is arguably one of the most relevant artists of our time. He takes on the subject of contemporary media, and shows how it increasingly invades our lives. Wang is somehow able to portray that experience in a way that truly represents the full force of information's pervasive grip," says Rene de Guzman, Visual Arts Curator for Yerba Buena Center for the Arts.

This exhibition is brought to the United States through a partnership between Yerba Buena Center for the Arts and the Vancouver Art Gallery. The exhibit includes three major installations: Defile (Parade) (2000), consists of thirteen large-scale sculptures that depict the military as "politico-spiritual" force and its media representations as a powerful ideological tool; Tapis Volant (Flying Carpet) (2003), is a wall-to-wall carpet made to illustrate the Time magazine cover from February 10, 2003 that features the space shuttle Columbia disintegrating as it enters earth's atmosphere; and Entre! (Enter!) (2004) is a work that looks at the internet as a black hole of dark material. It is made up of three-dimensional figures drawn from a porn Web site's home page that are scattered to greet viewers at the entrance of the exhibition. In addition, the exhibition includes a variety of recent works such as the International Herald Tribune series (2005), metallic replicas of crumpled newspaper pages referring to the waste of information consumption.

Wang is particularly interested in representations of politics, the military and celebrity, and repeated visual enforcement of cultural norms regarding ecology and sexuality. He says, "The ‘visual' and oral noise of information not only clashes constantly with the inner calm and peace that we naturally require, but it also risks replacing our existence." In this groundbreaking exhibition, Wang Du re-sensitizes us to our lives in the midst of the daily visual and informational flood. His energetic style, the towering scale of his artworks, and the in-your-face treatment of these ubiquitous images challenge us to confront the overwhelming info-matrix in which we live.

Wang Du was born in 1956 in Wahan, The People's Republic of China. As a young boy, Wang Du created propaganda-oriented caricatures as a way to perfect his drawing skills and offer social and political critique during the Cultural Revolution. In 1986, he co-founded "The Salon of Artists of Southern China" in order to open up the spread of information and allow individuals to invest in values outside the propaganda that had plagued China the last 20 years. In 1989, Wang was involved in the Canton pro-democratic protests and was arrested and imprisoned. A year later, he was released and shortly after exiled to France during the early 1990s. Since his move to France he has been creating sculptural installations that illustrate how massively distributed information about politics, war, celebrity and sexuality are manipulated and rapidly consumed.

Wang Du's work has been widely exhibited in solo and group exhibitions since the mid-1990s, notably as part of Hou Hanru's Cities on the Move exhibition in 1998, the Venice Biennale, and the Inside Out Chinese Art exhibition organized by the Asia Society and SFMOMA. In 2004 he exhibited Wang Du: Parade at La Criee in Rennes, Les Abattoirs in Toulouse, Le Rectangle in Lyon and Palais de Tokyo in Paris. The Vancouver Art Gallery and Yerba Buena Center for the Arts have extended Parade by bringing Wang Du's work to North America. On view will be freestanding monuments referencing the consumption and waste of mass media imagery.