For two years the artist visited the Tribunal to look at the International Criminal Tribunal for the Former Yugoslavia in The Hague against his former president, Slobodan Milosevic. 'Visitor' (2002-2003), consisting of 166 drawings, back to the city where it originated, the series is presented in chronological order. In the course of time the drawings become more and more empty. One single accurate stroke positions Milosevic on the page. Two more works will be shown: 'Study of my Father', photographs, and the video 'Beauty of Believing'. 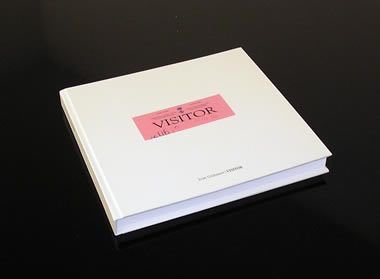 When Ivan Grubanov began his residency at the Rijksacademie in Amsterdam in 2002, this coincided with the start of the International Criminal Tribunal for the Former Yugoslavia (ICTY) in The Hague against his former president, Slobodan Milosevic. For two years he visited the Tribunal regularly. Confronted with the man and the events which had shaped his life, he looked for a way to capture the intensity of this experience. He started to make drawings, in an attempt to relate to this chapter in history.

With an exhibition at Stroom Den Haag Ivan Grubanov brings 'Visitor' (2002-2003), consisting of 166 drawings, back to the city where it originated. The series is presented in chronological order: the first drawings are tentative explorations of the courtroom, the people and their attributes. In the course of time the drawings become more and more empty. One single accurate stroke positions Milosevic on the page. Expressionless.

In addition to 'Visitor' two more works will be shown. The impressive 'Study of my Father' (2004) shows alternate images of the well-trained body of his father and photographs of demonstrations and buildings torn down by bombardments. The artist thus confronts his own 'origin'. The video work 'Beauty of Believing' (2005) has been commissioned by Stroom Den Haag; the temporary architecture of a stage, the carrier of either political ideologies or meaningless entertainment, forms the scenery for a meeting where commemoration and collective oblivion seem to coincide.

How does official history relate to personal history? How many individual 'complications' do the rules of political historiography allow? Grubanov describes his working method as 'mapping myself into complex historical situations'. He usually choses a subjective, documentary approach; there is always a certain ambivalence with regard to the subject. He avoids superficial points of view, opinions or unambiguous emblematic images. At the same time the artist also questions himself: how far can identification and self-reflection go?

Ivan Grubanov (Belgrade, 1976) belongs to the generation of young Serbian artists who grew up in a strictly confined society. They rebelled against the regime of Milosevic and demanded freedom of expression, open communication with the world around them, and room for new experiments in the visual arts. In these circumstances Grubanov became aware of his role in society and of his responsibilities, feeling obliged to defend his independent position as a public person within a strong political and social context. Ivan Grubanov studied painting at the art academy in Belgrade. In 2002-2003 he studied at the Rijksacademie in Amsterdam. At the moment he attends the Delfina Studio Programme in London. He recently had exhibitions in a.o. the Museum for Contemporary Art in Belgrade and Kunsthalle Bern. In concurrence the catalogue 'Visitor' appeared (authors include a.o. Phillipe Pirotte, Gerardo Mosquera). Stroom Den Haag will publish a supplement to 'Visitor', emphasizing the relati onship between the series and the city of The Hague, with texts by Gregor Guy-Smith (chairman Association of Defense Counsel, ICTY) and Kai van Hasselt (economist, urbanist).

Stroom Den Haag focuses on the urban environment from the viewpoint of visual arts, architecture, urban development and design.