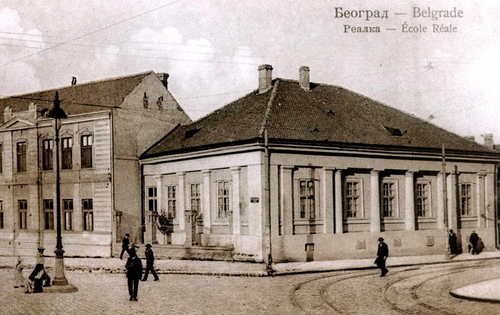 Belgrade Studiorum, by British artist Tim Brennan, was developed in the framework of , an on-going project conceived by Cecilia Canziani and Chiara Compostella. is a platform for cultural exchange and communication that fosters the participation of an audience within the different phases of producing an exhibition. The project is organized in collaboration with The Museum of Contemporary Art and The Educational Museum, Belgrade.

Over the last ten years, Tim Brennan utilised walking in a series of works in which he led groups through various city locations and composed a narrative using quotations with which he revisited and undermined an expected interpretation or reading of the space that the group explored. Rooted in an historical British artistic tradition - from J.M.W. Turner to Richard Long - that addresses walking as an aesthetic practice, Brennan's discursive performances question the role of the participant in the practice of space while addressing the role of the audience in a capitalist society. More recently, Brennan has developed a new body of work that inverts the notion of the guided tour where he no longer leads but rather creates a foundation for the social interaction inherent in a tour and asks the participants to negotiate a route, thus reversing the given hierarchy between artist and audience.

The Museum of Contemporary Art and The Educational Museum simultaneously present a new body of work, resulting of a participatory-based workshop organized with the artist in September 2005. A video, revisiting the walks, is presented on three screens in each location as an audio-visual polyphony; a set of photographs of the landscape around Belgrade, taken by Brennan with the camera in his mobile phone and printed on watercolour paper, is organized as a portfolio that the audience can flip through.

With Belgrade Studiorum we find ourselves on a tour of Belgrade where maps, postcards and guides are not required: one discovers the city through a varying and unexpected itinerary resulting from a constant negotiation between artist and participant. A result of the juxtaposition and superimposition of unique individuals, the walk in Belgrade reflects upon and makes one reflect upon the essence of the city: a crossroads of culture, born from the meeting/confrontation of different people. Tim Brennan's project underlines the richness and plurality of the Belgrade identity by means of an unexpected instrument: the very same people that populate and live in Belgrade. In taking the form of an anti-tour, the project questions and acts as a critique of the role of the artist in a globalised (art) world: parachuted into a place, marking it, and leaving again. In other words, the making of any specific space into a generic white cube where 'untouched by time, art exists in a kind of eternity of display', as addressed by Brian O'Doherty, in his seminal Notes on the Gallery Space.

Parallel to the video of the walks, the photographs represent a way of engaging with a specific place, similar to an indirect souvenir, a memory, an impression of Belgrade. The portfolio addresses the issue of the distribution of artistic work to a larger audience. Mirroring how J.M.W. Turner re-produced his own paintings in a different medium to allow for the greater diffusion of his work, Brennan condenses the otherwise ephemeral medium of performance into an object. These objects, a collection of landscapes, clearly refer to the sketches that artists, notably Claude Lorain and J.M.W. Turner, produced as part of their Grand Tour, thus deconstructing travel as part of the aesthetic experience ' the engagement, reading and interpretation of space' in an historical perspective. The pictures are the counterpoint of the choral depiction of Belgrade that appears in the video and reveals the (exoticising?) gaze of the artist.

With support from: The British Council, The City of Belgrade - City Government - Secretariat of Culture, Sunderland University.