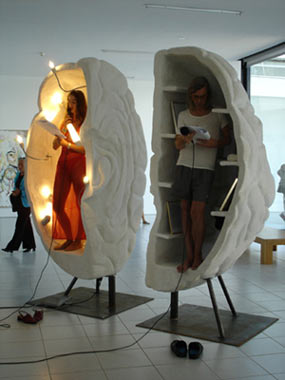 Galerie Nicola von Senger is pleased to present Elke Krystufek's exhibition The Visible Woman. The Viennese artist shows a group of works (sculptures, paintings, drawings) that engage the themes of religion and communication in a number of different ways, and which resume the work from her exhibition Proper Use that was shown at the Museum Dhondt-Dhaenens this autumn.

The brain is at the centre of this exhibition as the organ that produces religious thought and ideas. Over the years, these ideas have established themselves as principles. They rest on male conservative and archaic ideas that preconceptualise a patriarchal world-view and order. The architecture of this order, thought up by the male brain, which is said to have better spatial imaginary abilities than the female, stands monumentally and self-evidently as a cathedral at the heart of religious history. Elke Krystufek's brain sculpture stands similarly solid and oversized in the exhibition space. The brain has two cerebral hemispheres and is surrounded by works that put religious thought in perspective. This brain is also the organ which forms contrary thoughts, which withdraws from this order, and which questions religious and social norms. Here “God" is multiplied into sixteen word sculptures, a term that bridges the rational world with the world of faith in various languages and across cultures. It can be conceived in different ways, exists as a construct of the brain and is transposed into a real dimension through language. Prayer is immaterial. The word sculptures are light objects, communicable - in one word. Unlike spatial imagination, the ability to communicate is a strength of the female brain, which is of great importance in the communication age. Religion, which has sidelined the woman, made her body a temple, to be sure, but kept her chaste and hidden, encounters Elke Krystufek's scenario of The Visible Woman, which frees her from obscurity, makes her visible, and opens a new discourse.